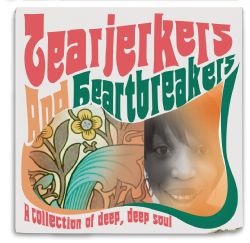 Here’s a great compilation of early soul balladry from budget label Righteous. Cleverly the compliers have left the sleeve notes vague and fail to mention any dates or original labels in the credits – probably because much of the material is pre-1963 and, ergo, no royalties are payable. That loss to the copyright owners (and maybe the artists and/or their estates) is the collectors’ gain as much of the music here has long been hard to find. I’m talking about stuff like Jackson and Perry’s ‘Wide Awake In A Dream’, Chyvonne Scott’s ‘I’m Moving On’ and the Chellows’ ‘I Want To Be Part Of You’… all previously unknown to me. That said the album also boasts many big names… people like Chuck Jackson, Solomon Burke, Maxine Brown, Donnie Elbert and Little Willie John.

Interestingly two of the key tracks here were covered by the two biggest British beat groups of the 60s –The Beatles and The Rolling Stones. Tunes in question are respectively Dr Feelgood’s ‘Mr Moonlight’ and Gene Allison’s ‘You Can Make It If You Try’. Just shows what great taste those early beatsters had and also what a debt back music owes to them for bringing the music to a wider audience.

A word of warning though; some of the tracks here aren’t, I’m sure, the original versions. OK, my ageing ears aren’t what they used to be, but the version of McKinley Soul Mitchell’s ‘The Town I Live In’ sure ain’t the original, sparse, wonderful  One-der-ful recording while I’m also fairly confident that the included version of the Impressions’ ‘For Your Precious Love’ isn’t the definitive, mould-breaking original. A small beef, yes and more than made up for by having access to great music like Mark IV’s ‘The Tide Has Turned’ and the Sheppards’ ‘Tragic’.