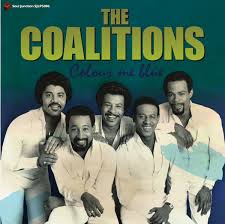 Just like volume 1, this new compilation offers soulful takes on classic country tunes and the exhaustive sleeve notes fill you in on the all the details of who recorded what first… who influenced who… where the recordings took place…indeed anything any self respecting anorak would need to know.

The album features lots of big soul names – none bigger than the mighty David Ruffin. His selection is a cut from his Van McCoy-produced album ‘Who I Am’… ‘Statue Of A Fool’. It’s a classic heartbreaker and THAT voice wrings every ounce of emotion from it … and if you need to know, the original was recorded by little known country star, Jack Greene. Other big names on the set include Bobby Bland, Clarence Carter, James Carr, The Sweet Inspirations, Joe Simon, Otis Redding, Millie Jackson and Isaac Hayes who does a magnificent “Hayes-ified” version of Hank Williams’ ‘I Can’t Help It (If I’m Still In Love With You)’… an awesome sonic structure.

Lesser known artists include The Facts Of Life, Ralph Lamar, Eddie James and Hank Ballard. Hank, of course, was famous for his raucous dance hits but here he shows a sensitive side on the country blues ‘Sunday Morning Coming Down’. The Kris Kristofferson song contains a wonderful down-on your luck verse about drinking beer for breakfast and looking for “your cleanest dirty shirt”. That perennial country fave – Willie Nelson’s ‘Funny How Time Sips Away’ is included too– this time in Dorothy Moore’s tender version. (I still prefer Joe Hinton’s, by the way).

All the tracks, save one are from soul’s Golden era. The odd one out comes right at the end and it’s arguably the album’s standout. It was recorded in 1996 and it’s ‘Forever’s A Long, Long Time’ from Orquetsra Was – essentially Don Was, his band and the great soul stylist Sweet Pea Atkinson on lead vocal. It’s a quite stunning, jazz-flavoured take on a 1951 Hank Williams song. I don’t think Hank or the original artist Jimmie Davis would recognize it, but they’d surely connect with the emotion.