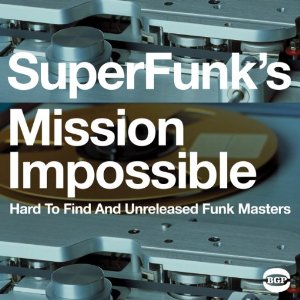 Over the last few years collecting rare funk records has become a passion for a growing number of soulsters. Those collectors have been well served by BGP’s ‘Super Funk’ series and the old crate diggers will be more than delighted with this new 20 tracker. Subtitled ‘Mission Impossible’, the compiler, Dean Rudland has searched long and hard to come up with some really obscure gems. To that end, 13 of the tracks have never been released before while the remaining 7 were only ever issued on hard-to-find 45s. One of those is S.O.U.L’s version of the Soulful Strings’ ‘Burning Spear’ and keen collectors will say that the cut’s not actually that rare… well this one is. The Ohio funksters cut the jazzy tune for their 1971 LP, ‘What It Is’ and that album version has been reissued several times. Here though BGP proffer the much rarer single edit that Musicor engineers turned into a tight, funky three and a half minutes. The single bombed and has long since been highly collectable. It’s one of many instrumentals on the set and there’s loads of variety amongst them. The wildest is probably ‘Oracabessa’ from the Ebony Godfathers while Miles Grayson’s ‘Junkyard Dog’ has a real flavour of Ramsey Lewis about it. Worth checking too are The Sixth Sense’s version of Wilson Pickett’s ‘Don’t Knock My Love’ and ‘What The Matter For Ya’ from one time Bill Curtis protégés, The Eternal Flames.

For a funk album there’s plenty of variety about the vocals too. O. C. Tolbert’s ‘Fix It’ is a classic slab of wild, frenetic funk while Sue Ann Jones’ ‘I’ll Give You My Love’ is almost smooth by comparison – lovely harmonies on the hook too. Then there’s ‘Time Is Winding Up’ from Gospel star Dorothy Norwood – a great cocktail of styles and never before released. But if you want really rare… then try ‘Talk Is Cheap’. Compiler, Rudland found the tape at GMG Records in Atlanta. No artist was listed and diligent research has failed to turn up a name. We’ll never know and, admit it, you really can’t get rarer than that. But, the cut’s a blistering piece of southern soul that would sit comfortably on any Stax compilation and it’s sure worth its place here and like I said up top funkateers world wide will be delighted with it and indeed the whole album.