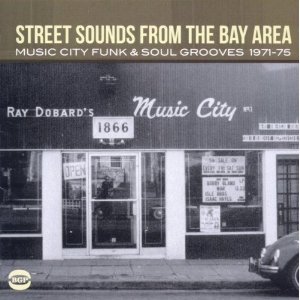 Ray Dobard was a music biz entrepreneur who worked in and around San Francisco in the 50s, 60s and 70s. His first power axis was based around a record store and recording studio on Alcatraz Avenue in Berkeley. The store, the studio and the label he founded all shared the name Music City. In the late 60s he opened a second Music City shop in Oakland and in 1970 he relocated his studio facility to the same neighbourhood. Though the shops were successful – local focal points for aspiring black musicians and their fans – the music he released on his label wasn’t. He had enjoyed some success in the late 50s with records on the 4 Deuces and Johnny Heartsman – but as the 60s became the 70s, it was clear he had lost his way in that side of his business. His methods were still the methods of the 50s and his hard-bitten reputation endeared him to few. Still, he kept on recording and here the Kent subsidiary, BGP offers 17 Music City tracks – recorded in that second studio between 1971 and 1975.

Of the 17 only 2 were ever released; of the rest – one has won an underground, cult reputation on the strength of bootlegs, while the remaining 14 are totally “undiscovered”. But what are they like? Well, the overriding flavour is rough, street funk with the odd dash of soul-jazz thrown in. That latter category is typified by the opening cut from Charles “Doc” Williams. He crafts an unsubtle medley of Wes Montgomery’s ‘Bumpin’ On Sunset ‘ and Dyke and the Blazers’ ‘We Got More Soul’, while the instrumental – ‘TP Paper’ from the Soul Sensations falls into the same category. The roughest of the funk is best represented by Victor Green’s ‘Giant Hamburger, Part 2’ … just about as rough as they come.

The two previously released cuts both come from Two Things in One. They’re the unfocused ‘Stop Telling Me’ and the organ-led instrumental ‘Snag Nasty’. Easy to hear why they were never hits. The cult classic is Darondo’s ‘Gimme Some’. It’s a bass-heavy oddity with a wildly fluctuating vocal and a rough-hewn quality that is clearly the “Sound Of Music City”. Funk fans and crate diggers will find lots here to interest them and the good news (for them at least) is that there’s a whole warehouse of Ray Dobard material waiting to be excavated.