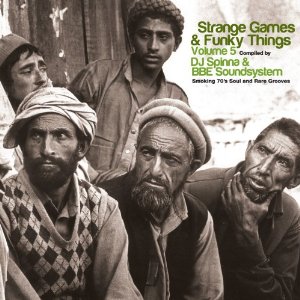 Back in 1997 bbe Records began their ‘Strange Games and Funky Things’ series. The idea was to use the label’s expertise and the talents of celeb musos and spinners to unearth underground 70s soul and 80s rare grooves and use it to show how that music helped shape hip-hop and modern R&B. This new set is volume 5 in the series and the celeb input here comes from DJ Spinna – acknowledged not just as a major league jock, but also a premier crate digger… and in essence that second role is what this compilation is really all about. You can argue as much as you want about how much stuff like Ned Doheny’s ‘Get It Up For Love’ or Merry Clayton’s ‘Gimme Shelter’ influenced contemporary R&B, but isn’t that all rather too academic? Instead we should look at this as a rather decent rare soul and funk compilation put together by someone with good musical taste and the wherewithal to dig those crates to his heart (and soul’s) delight. So what does he offer us? Well, there’s little that’s too well known. I guess the best known names are Sylvia, Richard Evans, War and the aforementioned Merry Clayton while way beyond left field we get the likes of CK Mann, SSO, Eddy Senay, The Perfect Circle and the Earth, Wind and Fire clone band – Wood, Brass and Steel. All very esoteric but the music does have a unity. There’s a bassy, almost dirty, funky undertow to the proceedings even on the Philly soul cuts like The Ambassadors’ ‘ I Ain’t Got the Love’ and the Philly Armada Orchestra’s take on ‘For The Love Of Money’. Even the Latin flavours ( for instance, Bill Summers’ ‘Brazilian Skies’)have heavy bass lines which, I guess, was essential to allow the redoubtable Spinna to offer the tunes in a prefect mix on the set’s second CD.