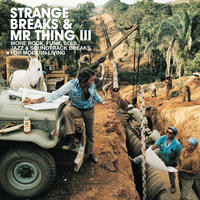 The small UK-based bbe label (barely breaking even) does a great job. Not only does the label unearth new and quirky talent, it also issues plenty of rare and vintage soul, jazz and funk – either by single artists sets of via some inspired compilations put together by some of the world’s best crate diggers and ‘Strange Breaks And Mr Thing III’ is one such collection.

The Mr Thing in the title is one of the country’s top hip-hop DJs and producers. He’s been at the job since 1987 and knows a thing or two about his craft. Therefore the bbe boys have tasked him to compile a collection that brings together some rare old tunes that, over the years, have been sampled, rifled and plundered by the hip-hop brigade. Mr T has delivered a 2 CD set which has a continuous mix on disc 1; while the second CD has the cuts unmixed…. take your pick.

Not too many well-known names on the set. Most familiar to me was Chuck Jackson who weighs in with the catchy ‘Candy’, guitarist David T Walker who offers his version of ‘Lay lady Lay’ and ex Faith Hope and Charity vocalist, Zulema who contributes a discofied but still tortured cover of ‘Giving Up’.

As we often say, though, it’s the really obscure tracks that bring the pleasure on albums like this. None more obscure on this compilation that the main title theme to the TV cop show ‘The Sweeney’ – here in a version by (wait for it) The Woolwich Polytechnic School Concert Band. Mr Thing mixes it into a sweeping soul dancer from the Capprells, ‘Close Your Eyes’ which then morphs into ‘Nature Boy’ from Sharon Cash. … and though you know it shouldn’t, it actually works. Yep, odd and quirky but strangely affecting, like the whole set in fact. Find out more @ www.bbemusic.com