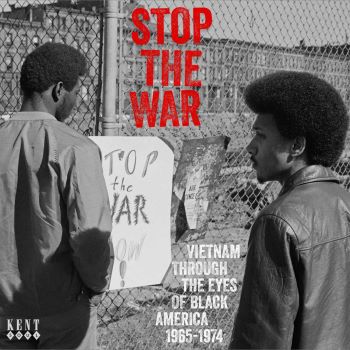 Sub-titled ’Vietnam Through The Eyes Of Black America 1965- 1974’ , this is Kent’s third compilation to chronicle black America’s musical reaction to the Vietnam War – a meaningless conflict in which African Americans suffered disproportionately high casualty rates. Like the previous 2 collections, this edition juxtaposes plenty of big names alongside a selection of lesser-known performers.

Biggest featured “names” are Marvin Gaye, William Bell, the Impressions, the Staple Singers, the Shirelles, Chairmen of the Board, the Emotions and Dionne Warwick. Their contributions are (respectively)… ‘I Want to Come Home For Christmas’, ‘Lonely Soldier’, ‘Stop The War’, ‘Mama My Soldier Boy Is Coming Home’, ‘Men Are Getting Scarce’, ‘Going On Strike’, ‘John Brown’ and ‘I Say A Little Prayer’. Not too many people realize that that latter Bacharach/David song is related to the War. Hal David was always adamant that it is. Listen properly to the lyric and you’ll fully understand why the protagonist says that important, little prayer.

The messages in the music of the lesser-known performers are no less potent. Indeed, the two most powerful, disturbing tracks come from relative unknowns – Joe Medwick and Dr. William Truly Jr. Southern soul buffs will be aware of Medwick (born Medwick Veasey). He wrote many of Bobby Bland’s hits (though Duke label owner Don Robey had them credited to D. Malone) and recorded for Huey Meaux. His offering here is ‘Letter To A Buddie’ – a spoken word piece in the form of a letter from home to a serving GI. It’s heart-breaking. Dr Truly’s ‘(The Two Wars Of) Old Black Joe’ is equally emotion wrenching. It’s another recitation that recounts the passing of a brave, medal-winning black soldier who, even in death, was a victim of racism… not much changes! Those two cuts alone are worth the price of this outstanding collection. Out now on Kent.