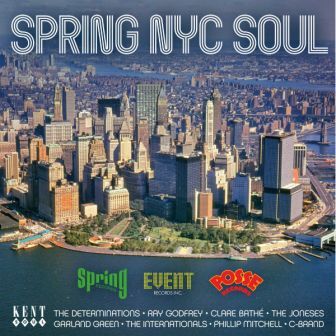 Spring was a New York based indie soul label that was active though the 60s, 70s and 80s. Over the years much of its material has been successfully reissued by Ace/Kent – plenty of single artist albums and well-received compilations. This new compilation brings together a generous 24 tracks from the Spring archive and its subsidiaries, Event and Posse. This collection’s USP is that there is plenty of “new” material included – “new” in the respect that the material has only just come to light and never been previously released.

Maybe of most interest to collectors is ‘Falling In Love’ from Victor Tavares (yes of the Tavares clan). It’s a quiet storm harmony ballad – not a million miles away from plenty of “real” Tavares material. Amongst the other previously unissued tracks is a brace from Ray Godfrey – who anoraks might know from his Raeford Gerald alias – a name he used in his song writing. His two offerings here are the sprightly ‘I Love You More Than Anything’ and the energetic ‘Hold On’. The album also boasts four other Raeford Gerald songs including the tremendous soul ballad ‘I’m The Other Half Of You’ – here in a previously unissued version from Maxine Weldon.

Familiar names on the collection include Joe Simon, the “Locomotion” girl Little Eva, Phillip Mitchell, Garland Green and Spring mainstays, the Fatback Band. Their contribution is the downbeat ‘If You Could Turn Into Me’ – a far cry from their funk signature sound. And that’s the beauty of this compilation – it throws up plenty of surprises and oddities – like one time Northern soul hero Ronnie Walker’s Philly, falsetto-led, Vince Montana-penned ‘Magic’s In The Air’… very Stylistics! Then there’s ‘Forever’ from Clare Bathé. The song was written by the Alessi Brothers of ‘Oh Lori’ fame while Chic experts will know that Ms Bathé was one of the vocalists on Chic’s first LP. Intrigue, interest, surprises and, above all, excellent uptown modern soul… all here!