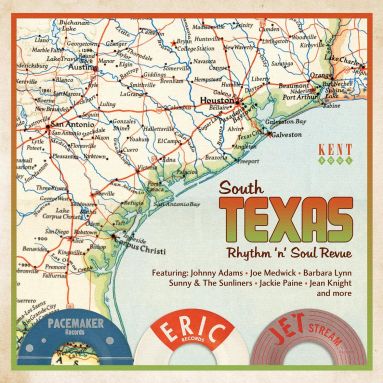 Ace/Kent have recently been given permission to dig into the vaults of American-based Music Enterprises Inc and the first fruits of the association is this 24 track celebration of the work of Houston’s Huey P Meaux. Meaux was active in the south Texas city for many years and was prolific in the music biz – discovering talent, writing and plugging songs, producing recordings and licensing them out and – most importantly – running his own labels… notably Jet Stream, Tear Drop, Eric, Pacemaker and Trinity.

Countless hopefuls passed through Huey’s hands; arguably the two most important/influential were Johnny Copeland and Barbara Lynn and both are represented here. Though born in Louisiana, Copeland pitched up in Houston in his teens and after splitting with his group The Dukes Of Rhythm, he worked for a number of different labels before signing with Meaux. He has two cuts here – the ponderous, bluesy ‘Slow Walk Down’ and the better-known, ‘Sufferin’ City’… though this version is different to the classic Northern fave that was released in 1968. A tad slower, this ’71 waxing was Johnny’s second go at the song and is eminently collectable. Equally desirable is the Barbara Lynn featured cut – a wonderful, stripped down, demo version of her signature song ‘You’ll Lose A Good Thing’ which gets its very first release.

Two other well known names featured in the collection are Jean Knight and Johnny Adams. Ms Knight offers a sombre version of Jackie Wilson’s ‘Doggin’ Around’ (recorded a full 7 years before ‘Mr Big Stuff’) while the “Tan Nightingale” is on top, melancholy from on ‘Let Them Talk’ and the chirpier ‘A Place Called Home’. There’s a hint of Sam Cooke about that one and Sam’s spirit lives on in Warren Storm’s cover of ‘The Tennessee Waltz’ … not too different to Cooke’s own version though.

Other highlights include Margo White’s naive ‘If Only You Were Here’, Jackie Paine’s ‘Go Go Train’ (a great rough and ready “name check” dancer) and the wild ‘Fat Man’ from the wonderfully named TV and the Tribesmen. Add to all that a smattering of blues, a helping of country-soul and a restrained James Brown cover and you have a great snapshot the work of an underrated music entrepreneur.