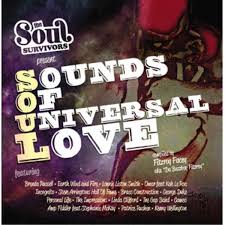 Expansion’s latest compilation is a collaboration with Soul Survivors magazine. Those of you who know the bi-monthly publication will know that its primary audience are soul fans/collectors whose passion is the music of soul’s golden age… the 60s- 80s. They really don’t want to know too much about anything post 1990 unless it has that lovely old school flavour and as for hip-hop, R&B, real jazz and proper funk they’d really rather pass. No surprises then to know that the music on the 16 tracker is tailored to the Soul Survivors formula; moreover all the featured artists have been interviewed by the mag in the last few years… so the set’s a kind of aural version of their printed word.

The oldest tune on offer is Linda Clifford’s ‘Only Fooling Myself’. Taken from her Curtom debut LP, it’s one of just a few slow jams on the collection and a lovely laid back antidote to some of the more energized items. The newest cut amongst the 16 is Personal Life’s ‘One Step Closer’. The track comes from their 2013 Expansion album (nothing like a little nepotism… helps with the royalties!) and those of you who know it will know it’s a pacey, danceable retro sound that fits the Soul Survivors criteria perfectly. Other “new” cuts on the album (i.e. those that were recorded after that 1990 cut off date) include Kelle Le Roc’s ‘Come On’, Incognito’s ‘Can’t Get You Outta My Head’, Kenny Wellington’s ‘Bahia’ and Amp Fiddler’s ‘Heaven’ – a duet with Stephanie McKoy and an unashamed throwback to another time.

From that “other” time enjoy music from greats like EWF, Lonnie Liston Smith, George Duke, Steve Arrington, Brass Construction, Cameo and the Impressions. Sadly their offering is the disco-slanted Eugene Record song ‘Fan The Fire’. Its quality of course (with Fred and Sam in charge, it couldn’t be anything else) but there’s lots better and more representative stuff in the Impressions’ 80s catalogue. Still, it’s a great little foot tapper and soundwise completely in kilter with the album’s feel.