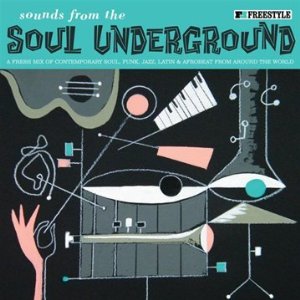 Here’s a refreshing soul compilation from indie label, Freestyle that shows that proper, committed soul music is still being made. It may be being made in odd places and much of it may only ever get aired on the underground scene, but if you’re fed up with the clichéd retro sounds peddled by the modern soul crew or left cold by the pro-tooled, formulaic music of many US soulsters, then you need to investigate this 17 tracker. It offers all kinds of soul flavours– Northern, funk, afro beat, Latin, jazz and more but the common theme is an honesty in the performances.

Quickest attention grabber on the album is ‘Hey Girl’ from Jo Stance – a Northern soul stormer which – hard to believe – is brand new and from Finland! Jo is Finnish vocalist Johanna Forsti and she and her team build the perfect Northern monster (not an easy task). It boasts a catchy melody, sweet, tinkling vibes and just the right beat pattern, propelled by a fat snare. Many Northern veterans – on hearing the cut for the first time – thought it was a rare, authentic  60s tune only just unearthed! Can’t say more than that. In fairness there’s little else here to please those old stagers but more broad mined soulies will find lots to enjoy – like Nick Van Gelder’s ‘Something’s Gotta Give’. Van Gelder was the drummer in Jamiroquai and here he teams up with vocalist Mazen to craft a Curtis Mayfield inflected floater. As insistent is the DJ Format remix of Speedometer’s ‘Again And Again’ while The Killer Meters’ ‘Cramp Your Style’ is unrestrained and funky. Check out the loose vocal from Karime Kendra –daughter of Ty Karim.

The rest of the album is stuffed with instrumentals that range from the ethereal ‘Dana’s Dream’ from Los Charly’s Orchestra (shades of the Mizzells) to the latin boogaloo of ‘Sol Et Ray’ from Ray Lugo… with lots more in between including a blistering reading of Johnny Pate’s ‘Shaft In Africa’ from The Mighty Showstoppers which quite refreshes tired ears… the point we made up top.