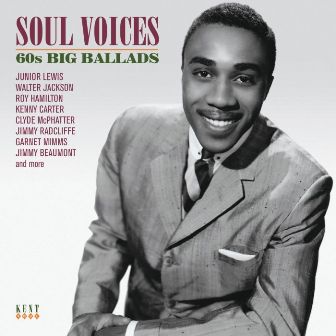 Ace/Kent get back into their stride with this wonderful 24 track compilation where the title is spot on for the music on the little silver disc. Soul voices? Well let’s mention just a few of the well-known names arrayed here…. Walter Jackson, Roy Hamilton, Ben E King, Garnet Mimms, Jimmy Radcliffe, Chuck Jackson, James Carr, Lou Johnson and Tommy Hunt! Each and every one a soul A lister but though they never achieved the same level of notoriety, artists like Freddy Butler, Kenny Carter, Sammy Sevens, Jimmy Beaumont and the other “unknowns” here delivered with the same soulful passion as any of those “big names”. And while we’re talking “big names” amongst the production/arranging credits are stalwarts like Bert Berns, Jerry Ragovoy Burt Bacharach, Teddy Randazzo, Riley Hampton and Bert Keyes. With a line up like that you know we’ve got some special music here!

Special and specialist…. the speciality being the urban, urbane, sophisticated “uptown” ballad. Indeed over three quarters of the tracks here emanate from the studios of New York – the Big Apple acknowledged as the epicentre of the genre. One of the few Southern sourced tracks is the James Carr classic ‘Lover’s Competition’ which though a Goldwax recording sounds like it came from a studio a stone’s throw from NY’s Brill Building! Oddly Gene Burks’s ‘I Can’t Stand Your Fooling Around’ though recorded in New York has all the feel of a Goldwax disc!

Serious soul collectors will have/know most of the tracks, though there are four previously unissued offerings. They are Kenny Carter’s ‘Like A Big Bad Rain’, Clarence Pinckney’s ‘Just Outside Of Lonely’, Billy Watkins’s ‘I Want To Be Loved’ and Junior Lewis’s ‘I Love You So Much’. That last one brings the CD to a sombre end… it’s just a demo with little more than organ accompaniment but like the opening cut, Walter Jackson’s ‘Forget The Girl’, it is a “big voice” on a proper 60s ballad. In between those two there are 22 more tracks that fit that bill perfectly.