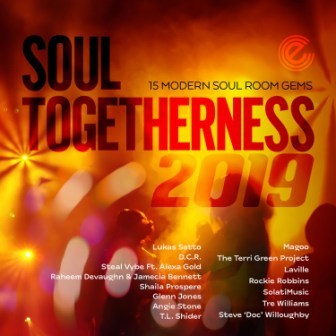 Proper soul fans know when autumn beckons… no, it’s not the kids going back to school, nor is it the shortening days and chillier nights. Neither is it the falling leaves…. it is, of course, the release of Expansion’s huge celebration of modern soul – their annual ‘Togetherness’ compilation.

The 2019 edition is almost good to go and this instalment is something rather special… you see, this is the 20th ‘Togetherness’ set – wow, yes, hard to believe but true – ‘Togetherness’ has been around longer than the Brexit debate! That said, there’s nothing stale, old-fashioned or complex here…. just 15 tunes that offer the very best in modern soul all serving to  remind you why you got involved in this crazy soul world in the first place.

Now let’s state the obvious. Most “proper soul fans” (the ones we mentioned in the first line) will either have, know and/or bopped the night away to most of the music here but that doesn’t make the compilation any the less valuable; rather it underlines its importance and value. What you have here is an accurate sonic snapshot of the state of modern soul in 2109 and as such it’s essential!

With a collection of such excellence, it’s churlish to pick highlights but any review worth its salt needs to focus on a few of the goodies – so let’s start with a real gem… ‘Same Number’ from someone called Angie Stone! Yes that Angie… here she is in all her glory gracing an Expansion compilation. The track, of course, comes from her new album ‘Full Circles’.

Other big names on the set include Raheem, DeVaughn (‘Need To Know’), Rockie Robbins (‘Good Life’) and Glen Jones (‘You And Me’). Those who know her album will know that Terri Green will be a big name too very soon. She’s here with ‘Giving It Up’ – her best outing this year!

Lesser luminaries featured on ‘Togetherness 2019’ include DCR, Solati Music, T L Shider and Steal Vybe who offer their version of the Donna McGee/Inner Life track ‘Make It Last Forever’… an old song with a lovely new treatment. And speaking of oldies… those familiar with the ‘Togetherness’ format will know that Expansion head boy, Ralph Tee likes to include a venerable oldie. This year’s “blast from the past” is the delicious ‘All My Life’ from Steve ‘Doc’ Willoughby. From 1978 and emanating from New Jersey, this has all the sophistication and class of those old Lou Rawls’ classic. We need say no more, save to save it brings the 20th ‘Togetherness’ collection to a rather satisfying close. It will make you smile (I guarantee that!) and, yes, you’ll also agree with what we just said: musically, that aforementioned crazy soul world is THE only place to be!