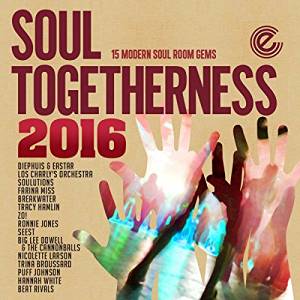 Last week Expansion Records celebrated their 30th anniversary and at the birthday bash (a big soul show at the Brooklyn Bowl in Greenwich’s O2 complex) they officially launched this year’s ‘Soul Togetherness’ album. The compilation series is Expansion’s flagship release and, assembled by label head boys, Ralph tee and Richard Searling, it’s always eagerly anticipated because it offers a concise snapshot of what is current on the modern soul scene.

The 2016 edition kicks off with a cut that beautifully sums up where the scene is currently at. Tune in question is ‘Don’t Quit, Be A Believer’ from Dutch outfit Diephuis and Eastar who managed to get the lovely Jocelyn Brown to front the cut. In the always-concise notes, Richard and Ralph say, “this record perfectly reflects the predominant flavour of 2016’s new soul releases – upbeat, feel good, melodic songs with strong vocals and disco derived beats”.

And there’s plenty more of that kind of music throughout the 15 tracker… stuff like ‘Sunshine’ from Los Charly’s Orchestra and ‘Just Whatcha Like’ from Zoi with Joi while the Beat Rivals’ ‘I Can Feel It’ and the Caister Mix of Hannah White’s ‘Sunny Day’ almost take those disco derived beats into house territory. If, however, you like your beats a little more stately then go straight to ‘What Have I Done Wrong’ from Big Lee Dowell and the Cannonballs featuring Maxim Moston. If it sounds like a proper, old soul record (despite its 2016 release) that’s because it is! The lovely vocal dates from some time in the early 70s but Italian muso, Alberto Zanini (with the help of string arranger Maxim Moston) has married it to a luscious new backing track.

If you like authentic oldies, you’re spoiled for choice here with offerings from Breakwater (an extended edit of their 1978 ‘No Limit’), Ronnie Jones (‘You And I’), Nicolette Larson (‘Lotta Love’) and Puff Johnson (‘Never Loved Nobody’). Add to all that a couple of tunes from the Cool Million team and the current big one from Geordie outfit SouLutions , and you really do have that concise (and delicious) snapshot of the modern soul scene.