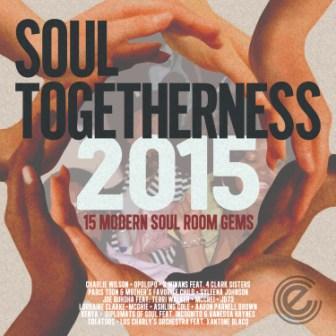 Autumn means different things to different people… mists, mellow fruitfulness, conkers, brushing up all those damn leaves… whatever! To the modern soul crew however, Autumn mean just one thing – the release of the annual ‘Soul Togetherness’ compilation from genre band leader, Expansion Records.

The latest instalment in the series has just hit the sales racks and the 15 tracker maintains the class and quality of all the previous releases in the franchise. The long player is stuffed with the best modern soul that the last 18 months or so had to offer.

Many of this volume’s key tracks have already been championed here at SOULANDJAZZANDFUNK. We gave early big thumbs up to stuff like Opolopo’s ‘Round And Round’, Syleena Johnson’s ‘All This Way For Love’, JD 73’s ‘Believe In Love’, Terri Walker’s Joe Buhdha collaboration ‘Feel Right’ and, most recently, the huge ‘Dance’ from the 3 Winans Brothers featuring the Clark Sisters. Sure, it’s a gospel tune but for soulful optimism this cut’s been hard to beat.

SOULANDJAZZANDFUNK was also an early supporter of Philly soul man Aaron Parnell Brown and we’re glad to say that his ‘Tin Man’ album (picked up Expansion) has been one of 2015’s big success stories, so a soul round-up like this would be redundant without something from him. Here you can enjoy a great Soul Talk remix of Aaron’s ‘Somewhere Around’. Always a key track on ‘Tin Man’, the Soul Talk crew take it to new soul levels and it’s so reassuring to know that proper soul music is still alive and well!

Other Togetherness 2015 highlights include a slice of Brit gospel from Lorraine Clarke-McGhie (‘Do You Know’), a new dance fave from UK sisters McCrei (‘Show Me’) and a slinky ‘Give It to You’ from Graham Central Station singer Ashling “Biscuit” Cole…. and then there’s the fab opener ‘Hey Lover’ from veteran Charlie Wilson (a Jam/Lewis production, this one, of course).

Togetherness fans know that the compilation always includes at least one venerable oldie. This year the treat is 1980’s ‘Just You And Me’ from the Creators. Expansion main men Ralph Tee and Richard Searling don’t know much about the tune or the band. They just know it oozes soulful class and good time optimism…. like everything else on offer here!