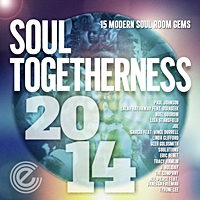 Expansion’s annual ‘Soul Togetherness’ compilation is one of the year’s most anticipated releases and this year’s edition justifies all that anticipation. The 2014 15 tracker – like all the previous sets – is stuffed with the classiest of classy modern soul and (continuing a recent trend) also includes a smattering of tasty soulful house cuts.

Interestingly three of this year’s ‘Togetherness’ tunes come in their Soul Talk remixes. In their original incarnations Paul Johnson’s ‘Better Than This’ , Lisa Stansfield’s ‘So Be It’ and Glen Goldsmith’s ‘London Skies’ were great records and would have made the ‘Togetherness’ cut anyway, but the Soul Talk tweaks take them to a whole new level and it’s impossible to pick which one is the best. The Drizabone team have one of their mixes in the collection too. It’s their delightful makeover of Soulution’s ‘Listen’. This has been one of the year’s hottest tunes and its still sounds good and vital too. (The duo’s album’s on the way, by the way).

Other fab tunes on the set include Tracey Hamlin’s cover of ‘Never Too Much’, Noel Gourdin’s ‘No Worries’, J Holiday’s ‘Thinkin About You’ and Garcia/Vince Durrell’s more laid back ‘Prayin’ For Rain’. As ever Mr. Tee drops a classic oldie into the mix. This year’s selection is Linda Clifford’s 1979 ‘I Can’t Let This Good Thing Get Away’. The Curtis Mayfield protégé is in her usual fine form and the tune features one of those lovely rolling bass lines that were always a feature of Ms Clifford’s best.

Then there’s the soulful house choices – The Company’s ‘Superstar’ (in its Reel People mix) and ‘Ready For Your Love’ from Neil Pierce with a searing vocal from Vanessa Freeman. Both are sophisticated, irresistible dancers with delicious bass lines and point the way to a possible new direction for modern soul. Whatever, their inclusion, the quality of the straight soul tunes and the ability of remix teams to discover new ideas proves that modern soul is truly alive and well and “together”!