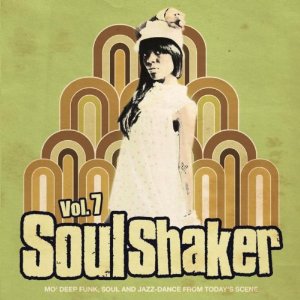 The Soul Shaker series is Italian label Record Kicks’ flagship compilation series. Since 2003, the Milan-based outfit have pushed out a massive amount of committed, real, modern soul and funk on artists from all corners of the world and their Soul Shaker round ups have been consistent in both sales success and quality. This new, seventh volume is every bit as good as all the others, though, maybe, genre-wise, it’s a touch heavier on the funk. There’s loads and loads of tight, raw syncopated grooves here and almost all can trace their lineage back to the Godfather himself. The spirit of JB looms heavily over stuff like ‘I Know What It Is’ from the wonderfully-named Shaolin Temple Defenders and Dojo Cuts’ ‘Grand Carnival’ which boasts a fab, raw vocal from Roxie Ray. Interestingly, that one’s never been available on any CD or compilation before … and that’s what’s so attractive about these Record Kicks compilations. Sure they put in plenty of back catalogue but they also ensure there’s lots of new and previously unavailable stuff to make a purchase that much more worthwhile. .. and speaking of previously unavailable material, the album’s oddest cut has never been out before either. It’s the gospel-charged funk bomb, ‘His Voice’ from Elder William Smith. Here the veteran preacher’s impassioned delivery of The First Psalm is set over a hard-edged track crafted by New Zealander Kris Holmes. Oddly, it works.

With so much funk on the set, the softer soul sounds standout. Best of the bunch is a wonderful Northern soul beater from the Pepper Pots called ‘Real Tru (sic) Love’. This delight has been put together by the Dap Kings’ guitarist, Binky Griptite (another wonderful moniker!). Some may find ‘Let Me Take You Higher’ from the Teenagers a little too poppy –though interestingly the vocalist is the veteran skinhead reggae artist Roy Ellis (remember Symarip?). The closing ‘Once I Had A Friend’ from the Baker Brothers is another goodie. It’s a big feel-good tune with a hint of the Caribbean about it and it ends the set satisfyingly. Like most of the other 16 tracks, it’s rough round the edges – rustic even, but that’s the attraction. There’s nothing here that’s too polished or sophisticated – such a change from the recent plethora of modern soul sets that are over-glossy and sonically air-brushed. On Soul Shakers, energy, commitment and enthusiasm carry the day.