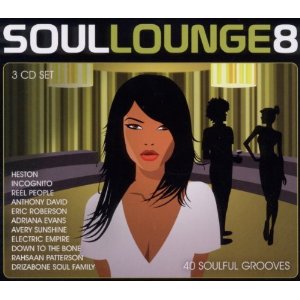 This is the eighth in Dome’s totally excellent ‘Soul Lounge’ series. The format’s the same as the previous seven – that’s to say this is a three CD box set offering over three hours of music – with that music being a mix of Dome back catalogue and outside-sourced material. More importantly, maybe, the quality here is every bit as good as anything that has gone before, so anyone wanting a snapshot of the current modern soul scene has it’s right here – stylishly packaged and at an attractive price.

The first CD in the set kicks off with a real corker – Chris Bangs’ re-mix of Heston’s ‘Greatest Lover’. The original was always a highlight on the man’s Dome set and here it’s re-born with Bangs giving it an almost ‘Soulful Strut’ feel. The CD also offers cuts from (amongst others) Anthony David, Eric Roberson, Cooly’s Hot Box, Martha Redbone and Down To The Bone.

Highlights on the second CD include Electric Empire’s ‘Baby Your Loving’ and the Chaka Khan-vocalised Incognito track ‘The Song’ and there’s also the album’s oldest cut – Beverly Knight’s 1995 ‘So Happy’. It still sounds good.

The third CD has a real soulful house feel about it, boasting loads and loads of brand new remixes. These include Terry Hunter’s tweak on Avery Sunshine’s ‘Ugly Part Of Me’ and Ski Oakenfull’s look at Incognito’s ‘1975’ – both of which appear on CD for the first time. Therein lies the appeal of the Soul Lounge series. There’s lots of quality newness amongst the pleasingly familiar and ‘cos it’s pitched at a great price, it really is unmissable