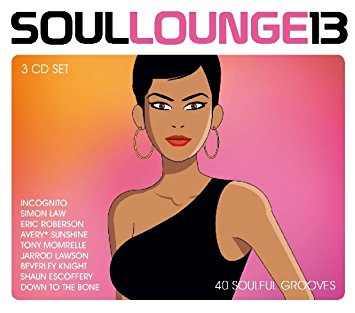 One of the highlights of the soul year is the regular ‘Soul Lounge’ box set compilation from ever-dependable Dome Records. The series now consists of 13 instalments and this new 40 track, 3 CD collection is every bit as good as all those that have gone before and the bonus is that the price is very decent (expect to pay around £12).

The format of ‘Soul Lounge 13’ is the same as the previous 12. That’s to say you get lots and lots of classy modern soul – some of it brand new and something from the archives – from names familiar and not so and though you will recognize and know most of the selections, the plus is that those familiar items are often offered in a mix that you may not be that familiar with. Best example here is probably Beverly Knight’s ‘Moving On Up’ – still a great tune, of course, but here it comes in an earthier, slightly slower “Ethnic Boyz Remix”.

Other remixes to look out for include Nigel Lowis’ mix of Shaun Escoffery’s ‘The Healing Game’ (one of this year’s BIG tunes) and the “Young Pulse” mix of Jarrod Lawson’s ‘Spiritual Eyes’. And talking of Shaun and Jarrod, those two gents provide two of the collection’s real highlights. First, Escoffery’s spine tingling version of ‘A House Is Not A Home’, recorded at a Royal Festival Hall Burt Bacharach tribute concert; then an excellent Jarrod Lawson rendition of Lauryn Hill’s ‘Ex Factor’ which was recorded for Trevor Nelson’s BBC 1Xtra Live Lounge. Both recordings are exclusive to this album and worth the twelve quid admission price on their own. To let you know though, you’ll also get excellence from people like Tony Momrelle, Simon Law featuring Caron Wheeler, Avery Sunshine, Incognito, Anthony David, Greg Dean, Incognito and Bluey, Eric Roberson, Dennis Taylor and Down To The Bone.