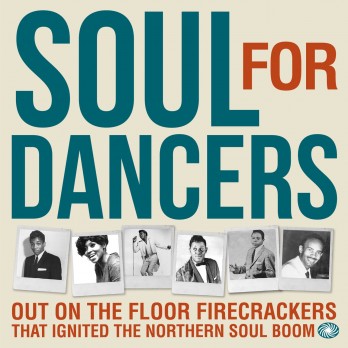 Complied and annotated by UK journalist, Lois Wilson, this new 2 CD, 61 tracker purports to offer a snapshot of the very early days of the Northern soul scene. Sadly, it’s not that all. As one who frequented the original Brasenose Street Twisted Wheel (not the upstart “new” venue on Whitworth Street – both Manchester, if you’re not clued up) I can tell you that this is most definitely NOT a Northern soul compilation despite what is says on the tin!

What ‘Soul For Dancers’ is, is a fabulous compilation of early soul, R&B and blues –an aural vignette of the clubs of the late 50s/early 60s when “Northern Soul” just didn’t exist. We did still have musical tribes though and here there’s lots of music that would and did appeal to those tribes (I used the word “would” ‘cos lots of the music here was never issued in the UK, so it didn’t have the opportunity to appeal, if you see what I mean!)

There’s lots of music here that would have been embraced by the embryonic mod community… stuff like Bobby Bland’s ‘Yield Not To Temptation’, the Isley Brothers’ ‘Respectable’ and the Sims Twins’ version of ‘Soothe Me’. Equally there are plenty of tunes that were beloved by the beat groups of the early sixties and their legions of fans. Songs like Arthur Alexander’s ‘Shot Of Rhythm And Blues’, Benny Spellman’s ‘Fortune Teller’ and Little Willie John’s ‘Leave My Kitten Alone’ were staples of almost every proper beat group’s repertoire…. indeed even the Beatles recorded a version of ‘Kitten’ for their Decca audition tape. The album offers raw blues too… perfect, yes for early 60s jazz and blues freaks but never Northern soul! C’mon guys, who ever danced to Howlin’ Wolf?

Now don’t get me wrong, this is a fabulous compilation. With archive and rare cuts from people like Sam Cooke, Little Milton, Jackie Wilson, Ray Charles, Etta James, Baby Washington and Sam and Dave how could it not be? Ever the pedant, I’m just quibbling about how all this wonderful music is being peddled!