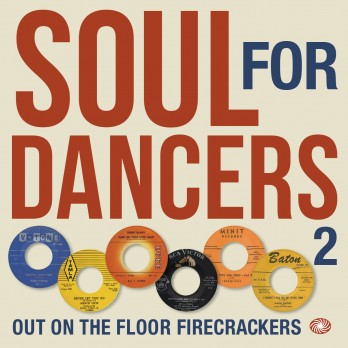 The second edition of Fantastic Voyage’s ‘Soul For Dancers’ follows much the same template as volume one. That’s to say the compilers have brought together a whole batch (60 tracks to be precise) of early soul and R&B the kind of music, they say, played in the early mod clubs – or would have been had it been released in the UK. The other unifying factor is that all the music is now out of royalty copyright – making the compilation easier to put together and allowing the label to set the album at an attractive price.

Like volume one, this collection boasts lots of big names…. amongst them Jackie Wilson (‘Lonely Teardrops’), Marvin Gaye (‘Never Let You Go’), Etta James (‘Baby, Baby Every Night’ and ‘Number One’) and James Brown (‘Good Good Loving’ and ‘Come Over Here’).

The Gaye song is a 1961 Motown recording and other featured Motown items include a couple from Gino Parks and ‘Please Mr Postman’ from the Marvelettes. Soul’s other iconic label, Stax, is represented by music from Carla Thomas, The Chips, Rufus Thomas and the Mar-Keys while the Chess contingent numbers Mitty Collier and Yvonne Baker.

There are plenty more soul heroes featured on the set… people like JJ Barnes, Doris Troy (recording as Doris Payne) and the Simms Twins whose Sam Cooke penned and produced ‘Don’t Fight It Feel It’ really does sum up the vibe and atmosphere of clubs like Manchester’s original Twisted Wheel (the Brasenose Street venue, that is) and Liverpool’s Mardi Gras. Other cuts that fall into that category are Bobby Bland’s still wonderful ‘Turn On Your Love Light’, Chris Kenner’s ‘Land Of 1,000 Dances’, Solomon Burke’s ‘Down In The Valley’ , Oscar Brown’s ‘Work Song’ and Arthur Alexander’s ‘You Better Move On’.

I can personally testify that they WERE mod club staples (yes, old codger time, I was there!) and, yes, we could take issue with some of the other selections but that would be curmudgeonly. Stuff like the 5 Royales ‘Tell The Truth’ and Lula Reed’s ‘Rock Love’ have probably been included because the compilers, young shavers that they are, have made reasonable assumptions… black music? soul club? it must have been played. Well, it didn’t quite work like that…but that little grumble doesn’t spoil the enjoyment of another wonderful early soul and R&B collection.