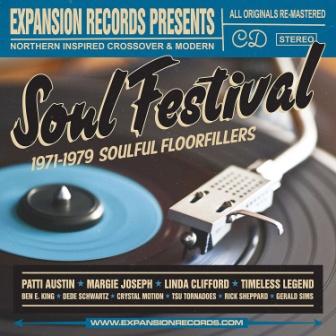 ‘Soul Festival’ is a new compilation series form modern soul brand leaders Expansion Records and we’re told that the series will focus on “the period from when new soul music took influence from the Northern soul we enjoy at UK clubs and events”. The date span on the covers defines that period as 1971-1979. “A time”, the compilers say, “when records became more lavish in their arrangements and grander in production, but always with that essential soul feel”.

Rather than rabbit on, though, best perhaps to give you some examples of the flavour that ‘Soul Festival’ offers. The set kicks off with Margie Joseph’s 1975 outing ‘I Can’t Move No Mountains’ and finishes with Richard Stepp’s light and lovely ‘Caught Up In A Whirlwind’. Both are indeed “grand” and “lavish” and, yes, “soulful“. In between there’s lots more of the same. Big favourite here right now is Ed Robinson’s 1971 version of the Knight Brothers’ Chess classic ‘Temptation ‘Bout To Get Me’. It’s one of my favourite songs and to my shame never ever knew about this lovely updated version. Another gem is the included version of the anthem ‘Funny How We Change Places’. Most know and love Debra Anderson’s version but it here it comes courtesy of “Dede Schwartz”… the name Dee Dee Warwick used during her tenure at RCA Records.

Other highlights here at SJF include Gerald Sims’ ‘You’ll Never Be Sorry’, sometime Young Rascal, Felix Cavaliere’s ‘Never Felt Love Before’ and Ben E King’s ‘What Do You Want Me To Do’. Other featured artists include Bobby Thurston, Leon Ware, Timeless Legend, Patti Austin and Chuck Cissell… those who know his version of ‘Love Is Missing From Our Lives’ will love his sprightly ‘Don’t Tell Me You’re Sorry’.