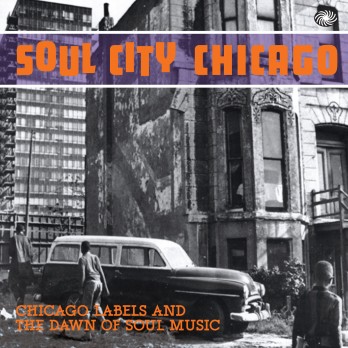 Fantastic Voyage’s latest archive compilation is a 2CD, 60 track collection of early Chicago soul. It’s one of those “out of copyright” sets so all the music is pre 1963 but, nevertheless, it contains countless gems from major artists sourced from labels like Chess, One-Derful, Okeh and Vee-Jay. It was for that last set-up that Jerry Butler recorded and he gets two cuts on the collection – ‘It’s Too Late’ and the monumental ‘Make It Easy On Yourself’. Interestingly there’s nothing from the Impressions Vee Jay tenure though sometime Butler Vee Jay duettist, Betty Everett, offers two tracks – ‘Your Love Is Important To Me’ and ‘I’ve Got A Claim On You. These though were recorded for One-Derful, which was also the home of the hugely neglected McKinley “Soul” Mitchell. He has five cuts in the collection – one being his classic ‘The Town I Live In’. Self-penned and released in 1962, it’s one of those magical, timeless soul records whose attraction you just can’t define. Simple and sincere it has a magical quality that makes you realize why you got caught up in crazy soul world of soul in the first place.

Given the Chicago context, it’s hardly surprising that the bulk of the material on the 60 tracker comes from the Chess vaults. That garlanded label is represented by people like Etta James, Sugar Pie DeSanto, Bo Diddley, Buddy Guy, Billy Stewart, The Radiants and the Dells. That mighty group are allowed four inclusions – two from Vee Jay two from Chess/Argo…. real archive stuff, with the quintet doing doo-wop and novelty but still working towards what would become their signature sound.

Plenty of lesser known names too – the Corsairs, The Sheppards, Dee Clark and Wade Flemmons amongst them but their contributions are just as valid as the music from the bigger names.

Interestingly and maybe oddly the tracks are sequenced by artist. So, for instance, we get a brace of Walter Jackson songs followed by two from Dee Clark then three from Gene Chandler and so on. The whole thing’s been put together by veteran soul writer Clive Richardson so I guess he has a good reason for this and his notes are worth a read too.