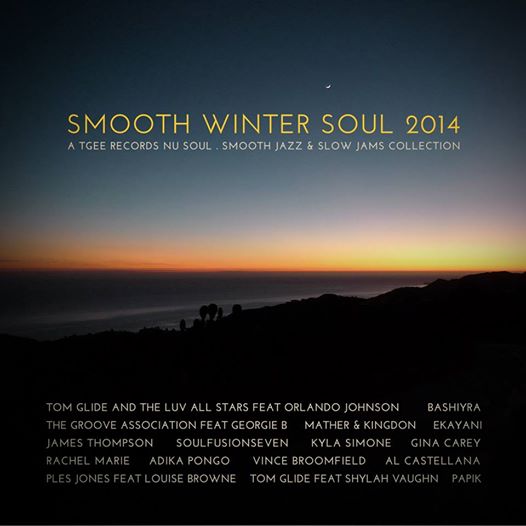 The modern soul congregation will know all about Tom Glide. The French muso has a penchant for the great soul sounds of the 80s and his 2010 album ‘In The Name Of Luv’ was well received by the brethren. Since then Monsieur Glide has been building up his own label – T Gee Records- and the imprint has issued some fine compilations and this new 16 tracker is the latest to roll off the T Gee assembly line.

You can guess from the title that the collection has a distinct theme….yep, it’s a selection of smooth soul cuts designed for that special time when the wintery wind is howling at the windows, when the snow is swirling over the rooftops and when you’re relaxing with that someone special – sharing what’s left of the Baileys and the Toblerone! ‘Smooth Winter’ is an unashamed “lurve” album with a distinct feel of the 80s about it but because notre ami, Tom, has trawled the best of the indie soul scene for his music the album manages to avoid the crass cheesiness that many of these albums specialise in!

The set boasts two cuts from Tom himself…. ‘I’m Crazy’ and ‘Soul Life’. The former was a standout on the ‘In The Name Of Luv’ album and here, in a remixed version, it’s lost none of its beauty. Orlando Johnson’s vocal is soulful and Maurice Herd’s strings are superb. ‘Soul Life’ is a retro soul ballad that reminds me a lot of Steve Harvey’s ‘Troubled Times’. There’s a passionate vocal here from Shylah Vaughan.

Modern soul folk will probably be familiar with stuff like Al Castellana’s Philly flavoured ‘Lucky Man’, Papik’s ‘Is This Love’ and Bashiyra’s ‘Woman’ but there’s plenty that’s unfamiliar too. Try Bengali-originated ‘Guara Pahu’ or the jazzy ‘Steppin’ Up My Love’ from the Soul Fusion Seven for starters. The oddly-titled ‘Daisy 2-0’ is another album highlight, though it’s lite and lovely summer vibe is a little out of kilter with the LP’s theme.

Find out more about this album and other T Gee recordings @ www.facebook.com/tgeerecords