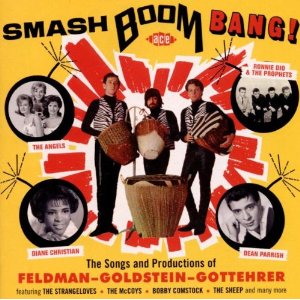 This rather odd looking album is a tribute to one of New York’s greatest (but sadly long neglected) song writing and production teams – Bob Feldman, Jerry Goldstein and Richard Gottehrer. All of Jewish extraction (like so many in the New York music biz), the trio worked together for just four years (1962 – 1966) but in that time they penned and produced countless hits across all kinds of genres and what’s more, lacking the pretensions of many of their contemporaries, they weren’t afraid to adapt, to have fun and to ride whatever pop bandwagon that happened to be passing. They even reacted positively to the British beat invasion – coming up with their own quirky version of it.

This lively 26 tracker offers a great snapshot of the team’s work. There’s some great soul here –notably Jerry Butler’s ‘Giving Up On Love’ – one of the coolest ballads the Ice Man was to ever record. Almost in the same league is Ray Pollard’s ‘The Drifter’ – a song that was originally pitched at Ben E King, but rejected by Atlantic because of the connotations with his old group. The Jive Five (featuring Eugene Pitt) come up with something a lot more rustic – ‘What Time Is It’ while that perennial Northern fave – Chubby Checker’s ‘At The Discotheque’ – is bound to set even old feet tapping.

Elsewhere there’s plenty of fabulous ’60s pop ranging from the classic girl group sound of The Angels’ ‘My Boyfriend’s Back’ to Bobby Comstock’s rocking ‘Let’s Stomp’. There’s surf sounds (a version of Brian Wilson’s ‘You’re So Good To Me’ from Debra Swisher) and blues (a cover of Bo Diddley’s ‘I’m A Man’ from that man Comstock again). More interesting to pop students maybe is Feldman- Goldstein- Gottehrer’s take on the Merseybeat sound. To deliver, the trio created a bogus band, The Strangeloves, who released things like the seminal ‘I Want Candy’ and worked with real group, The McCoys – whose ‘Hang On Sloopy’ (a song F-G-H nicked from the Vibrations) is included here along with their original version of ‘Sorrow’ – a song that was to achieve hit status first with authentic Merseybeat band, the Merseys and then David Bowie.

Add to all that crazy stuff from people like the Pygmies (‘Don’t Monkey With Tarzan’) and the Powder Puffs (‘You Can’t Take My Boyfriend’s Woody’) and you have a wonderful celebration of everything that was good about mid ’60s US pop and a great tribute to a classy trio who understood more than most what pop music was meant to be.