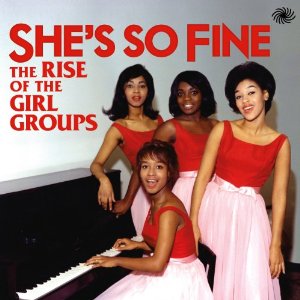 Sub-titled ‘The Rise Of The Girl Groups’, this 3CD, 95 tracker is a wonderful testament to one of pop and soul’s most endearing sounds. Girl groups have always been (and indeed still are) a staple of the pop and soul scene. The lineage of teams like Girls Aloud and the Spice Girls can be traced way back to the 1930s when sibling groups like the Andrews Sisters and Boswell Sisters ruled the air waves. But it was in the late 50s and early 60s that the “Girl Group Sound” crystallised and came to dominate pop charts around the world.

This collection examines the phenomenon in a roughly chronological order and most of the big names of the genre are included – The Cookies, The Crystals, The Paris Sisters, The Ikettes, The Chantels, Patti Labelle and the Blue-Belles, The Chiffons, The Orlons and the wonderful, wonderful Shirelles. Led by the incomparable and vastly underrated Shirley Owens (later Alston-Reeves), the Shirelles virtually defined the girl group sound and in ‘Will You Still Love Me Tomorrow’ they cut a disc that remains one of the greatest pop and soul recordings of all time. It’s been covered hundreds of times, but no one (not even the great Dusty Springfield) could match the passion, commitment and innocent naivety of Shirley’s original recording. In a little over two minutes it defines the spirit of an era… the perfect soap opera! It takes pride of place here along with their ‘It’s Love That Really Counts’ and The Chiffons’ ‘He’s so Fine’ from which the collection takes its title.

There are lots of Motown inclusions too. Berry Gordy was totally aware of the potential of the Girl Group Sound (let’s face he was up to speed on anything that would make him money) and he groomed outfits like the Marvelettes and the Supremes as his versions of the Shirelles and the Cookies. And didn’t it work out wonderfully well for the wily ex-boxer?

Interestingly, the album also boasts a number of solo singers – but their inclusions are very much part of the “Girl Group Sound”. So, things like Dee Dee Sharp’s ‘Mashed Potato Time’, Betty Lavette’s ‘My Man He’s A Lovin’ Man’ and Tina Robin’s ‘Dear Mr DJ Play It Again’ perfectly fit the overall vibe.

The importance of the “Girl Groups” can’t be understated. They did define a time and place and went on to inspire generations of new musicians… none more so than the Beatles. No less than four songs here (The Marvelettes’ ‘Please Mr Postman’, The Shirelles ‘Baby It’s You’, The Donays’ Devil In His Heart’ and Little Eva’s ‘Keep Your Hands Off My Baby’) were all recorded by the Fabs, while a court stated categorically that George Harrison’s ‘My Sweet Lord’ was a blatant cash-in on The Chiffons’ ‘He’s So Fine’.

My only criticism of the collection would be that there’s nothing here from The Ronettes… and there’s no explanation. Maybe it was a licensing problem or maybe in Ronnie Bennet (Spector) there was someone whose vocals were just a tad to menacingly sexy for a genre that was famed for its veiled innocence.