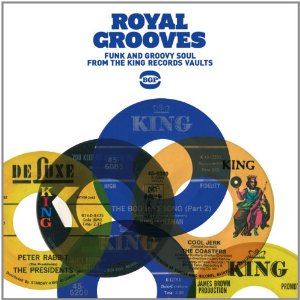 Syd Nathan founded King Records in Cincinnati in 1943 ostensibly as a country label but Nathan, who always had an eye for the main chance, soon moved into the growing R&B market. His roster soon boasted big names like Billy Ward and the Dominoes, Hank Ballard and the Midnighters, Bill Doggett, Wynonie Harris and Little Willie John. In 1955, though he signed the man who was go on to become his biggest “name” –James Brown. Two massive egos, Nathan and Brown endured a love/hate relationship but by the mid 60s Nathan had accepted the fact that Brown was his chief breadwinner and subsequently used Brown as a producer (real or imagined) on numerous other King releases … hoping that some of the Godfather’s magic might bring success to lesser performers. That trend continued after Nathan’s death in 1968 and even when Brown moved across to Polydor and King was sold on (to a consortium that included Lieber and Stoller), the signature King sound chiefly remained the sparse funk that Brown had created, though the new owners also licensed in other soul sounds.

This new BGP/Ace 23 track compilation offers a snapshot of King’s output between 1967 and 1973 –the very years that spanned Brown’s dominance, Nathan’s death and the subsequent change of ownership. From what’s been said you can expect lots and lots of Brown-inspired (even led) raw funk. Best example of that sound is Wendy Lynn’s ‘I Can Remember’, though the most obvious Brown tie-in comes from the Brownettes with the frantic ‘Baby Don’t You Know’. The group had been part of James Brown’s Review and Mr. B himself takes a writing credit though he seems to have borrowed quite a lot from Etta James’ ‘Something’s Got A Hold On Me’. Clay Tyson’s ‘Man On The Moon’ is another JB penned item. Frank Howard’s ‘Do What You Wanna Do (pt. 1)’ is one of those Brown half chanted/half instrumental type things while The Presidents’ ‘Peter Rabbit’ goes the whole hog instrumentally. Exactly what Mr. Brown had to do with these cuts is hard to say… for instance he’s credited as producing Kay Robinson’s searing slab of gospel ‘The Lord Will Make A Way Somehow’… though Ace research shows he had little to do with the recording…who knows?

Some items clearly have nothing to do with Brown. Most obvious is the stuff that was licensed in –like the Coasters’ Latin-ized version of ‘Cool Jerk’. Very different to the Three Caps/ Capitols hit version it offers some respite from the hard-edged funk that dominates the collection.