VARIOUS: Right Back Where We Started From (RPM) 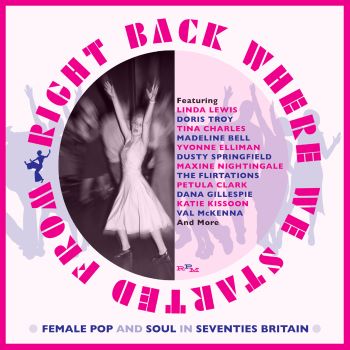 Over the years the RPM label (part of the Cherry Red group) has issued loads and loads of excellent archive compilations. Sadly, the imprint is now bowing out but is leaving with a splendid last release which is as intriguing, informative and esoteric as all its previous output. This new, final collection is ‘Right Back Where We Started From’, named for Maxine Nightingale’s 1975 UK and US hit and that’s the clue to the theme of the 3 CD, 77 track package. Yes, it focuses on female pop and soul in seventies Britain – an area apparently becoming popular with collectors, who, of course, will be delighted with the set.

Maxine Nightingale isn’t the only hit maker included in the collection. There are plenty of other big names… many bigger than the diminutive Wembley-born Ms. Nightingale. For starters we’ve got Linda Lewis, Petula Clarke, Helen Shapiro, Madeline Bell and dear Dusty Springfield. Dusty’s track is her cover of the Classics IV’s ‘Spooky’.  Soul collectors will recognize two more famous genre names… Doris Troy and Doris Duke. The first Doris scored US soul hits in the mid 60s but came to the UK in the latter part of the decade. She settled here and became a top session singer as well as recording in her own right. At one time she was even signed to the Beatles’ Apple label. Her offering on this album is the title track to her 1974 LP ‘Stretchin’ Out’. Doris Duke, like Doris Troy, is a cult soul heroine, best known for her classic deep soul album, ‘I’m A Loser’. In the mid-70s the then editor of Blues and Soul magazine, John Abbey, brought her to London to record and album for his Contempo label. From that album, ‘‘Right Back Where We Started From’ offers her sprightly version of Gamble/Huff’s ‘A Little Bit Of Lovin’’ – a far cry from the deep soul for which she’s revered.

Amongst the 77 tracks of ‘Right Back Where We Started From’, soul collectors will find plenty more interesting covers of soul tunes, like Hazel Dean’s discofied take on ‘Our Day Will Come’, Ruth Swann’s version of ‘Tainted Love’, Paula Knight’s poppy reading of the 4 Tops’ ‘It’s The Same Old Song’ and the Flirtations re-make of Marvin Gaye’s ‘Little Darling I Need You’ which they cut for the Wigan based Casino Classics label.

And that’s the beauty of this collection. It throws up plenty of surprises and oddities and turns the spotlight all too briefly on dozens of wannabees and dreamers. The esoteric brigade will enjoy things like a cut from Avengers actress Linda Thorson, a version of Johnny Bristol’s ‘Can’t Give It Up No More’ from Jackie and the Majestics (“Jackie” was  a recording alias of Jackie Trent) or Twinkle Ripley’s ‘Caroline’ – Twinkle was the ‘Terry’ hit maker and, wonderfully, a primary school class mate of Theresa May! All that and a lot more are here to enjoy in this wonderful swan song for RPM!