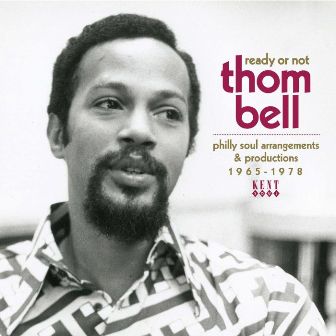 The wonderful Thom Bell is the latest backroom boy to be honoured with a Kent compilation of some of his best songs, productions and arrangements. Can’t be too many soul fans/collectors who don’t know an awful lot about Bell and/or have a mass of his material in their collections but when some of his very best is collected across 23 tracks you get a clearer and more concise picture of his achievements and contribution to the sweet, smooth  and sophisticated soul genre – a style that he more or less created himself… though in the notes, the genial Bell acknowledges the debt he owes to people like Teddy Randazzo, Van McCoy and Burt Bacharach in defining his own special sound.

That special sound is defined here by a dozen or so classics that he helped craft – things like the O’Jays’ ‘Backstabbers’,  Jerry Butler’s ‘Moody Woman’, the Spinners’ ‘Could It Be I’m falling In Love’, New York City’s ‘I’m Doin’ Fine Now’, Teddy P’s ‘Close The Door’, the Stylistics’ ‘People Make The World Go Round’, the Delfonics’ ‘Ready Or Not’ and the vastly underrated ‘Track Of The Cat’ from Dionne Warwick.

For sure, they’re all beautiful pieces but the real beauty of this compilation lies in the lesser known material – things  like the Orlons’ ‘I Can’t Take It’ and the two tracks from pop stars Lesley Gore (‘Look The Other Way’) and Connie Stevens’ (‘Tick Tock’). There’s also a Dusty Springfield track – ‘I Wanna Be A Free Girl’ (taken from her Gamble/Huff produced Philly album) and speaking of top femme stylists you can also enjoy Laura Nyro and Labelle’s reading of ‘It’s Gonna Take A Miracle’. Maybe the least known item amongst the 23 cuts, though, is ‘It’s The same Old Love’ from The Courtship. This was arranged by Bell in 1972 for the band’s only single on Motown. (Anoraks will tell us they had one more single released on Glades).

Big names or wannabees – it didn’t matter to Thom Bell. He lavished the same amount of care and musicality on everything he worked on… it’s self-evident from this stunning 23 tracker!