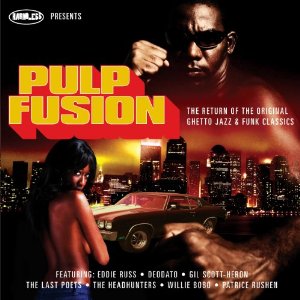 Harmless Records celebrates its 15th birthday by releasing this new ‘Pulp Fusion’ compilation. The original ‘Pulp Fusion’ album was one of Harmless’ first outings and it spawned a hugely enjoyable and collectable series – specialising in unearthing the hard-edged funk, soul and jazz that was synonymous with the era of blaxploitation. This new, double CD 28 tracker has been compiled by top crate digger Dean Rudland and like all previous compilers he’s managed to mix the well-known tunes with some much more obscure items. Amongst the well-known, there’s Gil Scott-Heron’s ‘The Bottle’, Norman Connors’ ‘Captain Connors’ and Willie Bobo’s ‘Always There’. The rarer stuff includes Deodato’s ‘Super Strutt’, The Last Poets with ‘It’s A Trip’ and Patrice Rushen’s ‘Let Your Heart Be Free’. There’s plenty of ultra rare material too – notably ‘Lope Song’ from Eddie Russ – a real rare groove classic, recently championed by Giles Peterson and Reuben Wilson’s soul-jazz cover of Marvin Gaye’s ‘Inner City Blues’. Good too to see the good old Average White Band flying the home flag – their contribution is the ever-lovely ‘Person To Person’. Equally gratifying is the number of Philly cuts included. They number Billy Paul’s ‘We All Got A Mission, Dexter Wansel’s ‘Life On Mars’ and MFSB’s Mysteries Of The World’. Together they show a harder edged side to Philadelphian-crafted music that some people don’t know exists… and in a nutshell that’s part of the beauty of this album and indeed the whole series… by presenting the familiar and not-so-familiar in a new context it can help even jaded fans reassess where they’re at musically. But hey –let’s not get too academic and heavy… just enjoy some great, real soul, soulful jazz and feisty funk.