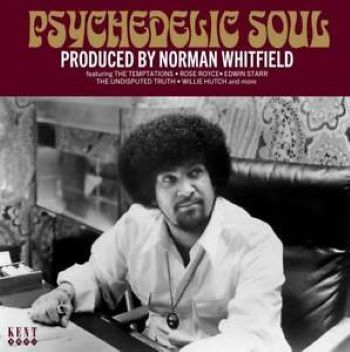 Despite his phenomenal success rate Norman Whitfield (who died in 2008) doesn’t get the same kind of plaudits as some of soul’s (in general) and Motown’s (in particular) other producers/writers. Hopefully, this new 18 track compilation from Ace/Kent will help set the record straight. Compiled by Bob Stanley (who also put together the acclaimed, big-selling Thom Bell ‘Ready Or Not’ set), it pulls together Whitfield songs and productions from his days at Motown, from his own Whitfield Records and one from a Warner Bros album. Collectively, compiler Stanley has dubbed the music “psychedelic soul” and why not? That’s the usual tag given to Whitfield’s music – a soundscape that was often dark, brooding, atmospheric and eerie.

The collection begins with perhaps Whitfield’s most celebrated and most successful outing – Marvin Gaye’s ‘I Hear It Through The Grapevine’ – often cited as the most complete soul record of all time  and it ends with Rare Earth’s ‘Come With Me’. In between you can enjoy plenty of Whitfield’s best known work – Edwin Starr’s ‘War’, The Temptations’ ‘Psychedelic Shack’ and ‘Papa Was A Rolling Stone’ (the 7 minute version) and The Undisputed Truth’s ‘You + Me = Love’ amongst them.

There’s plenty of rarer, more obscure items too like Spyder Turner’s ‘I’ve Been Waiting’, ‘Love Is What You Make it’ from little known vocal group, Masterpiece, ‘Good Lovin’’ from equally obscure group, Mammatapee and ‘Just One Love’ from Stargard. This is the Warner Bros track.

Across the album, there are plenty of big names who all profited from Whitfield’s vision – artists like Gladys Knight and the Pips (with ‘The Look Of Love’), David Ruffin (with ‘Me and Rock N Roll Are Here To Stay’) and Yvonne Fair (with ‘It Should’ve Been Me’) Good to see an inclusion from Willie Hutch. His offering is his ‘And All Hell Broke Loose’ from his 1978 Whitfield album ‘In Tune’.

Together all this wonderful music proves that Norman Whitfield was indeed a major player who maybe deserves more credit that he usually gets. Now what about an album of his earlier work – the non-psychedelic period, if you would?  I mean, remember, he began working with Don Davis before moving over to Motown and in his early Gordy days he cut stuff like ‘The Girl’s Alright With Me’ and ‘Girl Why You Wanna Make Me Blue’ for the Temptations’. Then there was the Tempts’ ‘I Wish It Would Rain’ period and much more that was “pre-psychedelic”. In the meantime, enjoy this collection that proves that no matter what you  call it  good ‘ole Norm produced plenty of masterpieces (including, of course, the Temptations’’ ‘Masterpiece’!)