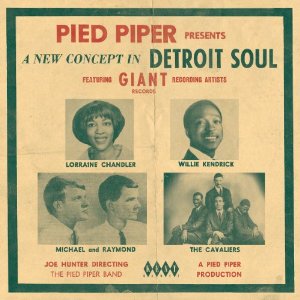 Pied Piper was a Detroit-based music production company founded in 1965 by Shelley Haims. Haims hailed from Cleveland and his background was in music promotion and distribution. By the mid 60s he was in Detroit, working for Ed Wingate’s Golden World/Ric Tic set up, but, realizing how much raw talent there was in the Motor City, he decided to have some of the action for himself. He recruited a small team that included Jack Ashford and Mike Terry – two disillusioned Motown men –and began recording local artists. He created his own label, Giant, but preferred to lease his material to bigger labels – most notably RCA, who were keen to get themselves deeper into the black music market. No Pied Piper production enjoyed much success but over the years the imprint has achieved an iconic status on the Northern and collectors’ scenes. To satisfy this interest, the Ace/Kent crew have managed to gain access to the Pied Piper archive and the result is this lovely 24 track overview.

The sound of Pied Piper is the sound of classic mid 60’s up-tempo, uptown soul; the sound of Motown if you would (hardly surprising since many of the musicians were moonlighters from the Motown Snakepit). There are no big, household names here, but collectors will know all about people like Lorraine Chandler, Rose Batiste, Freddy Butler and Tony Hester. Hester of course is best known as a “backroom boy” (credits include The Dramatics’ ‘In The Rain’) but in the 60s he nursed ambitions as performer. Here his 1966 ‘Just Can’t Leave You’ is an absolute delight… echoes of the Fantastic 4. Other highlights include the Hesitations’ ‘She Won’t Come Back’, Freddy Butler’s ‘That’s When I Need You’ ( a massive tune on the 70s Northern scene), Mikki Farrow’s ‘Could It Be’, Sam E Solo’s ‘Tears Keep Falling’, The Cavaliers’ ‘We Go Together’ and Lorraine Chandler’s sensational ‘Mend The Pieces Of My Heart’. Those last two, by the way, are amongst 13 cuts that have never been released before – more than enough for the most demanding collector while the usual, exhaustive Kent sleeve notes will satisfy even the most pedantic of anoraks.