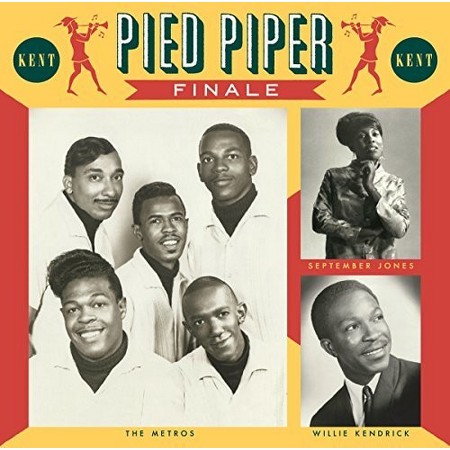 Pied Piper was a Detroit-based music production company founded in 1965 by Shelley Haims. Originally from Cleveland, by the mid 60s he was in Detroit, working for Ed Wingate’s Golden World/Ric Tic set up, but, ever ambitious, he decided he wanted some of that city’s burgeoning music action (and dollars) for himself. He trawled around and found two disillusioned Motown men, Jack Ashford and Mike Terry and the trio set about recording any Motor City artists whom hadn’t been swept up into the Berry Gordy empire. The team, essentially a production company, set up its own label, Giant, but preferred to lease his material to bigger labels – most often RCA. Sadly, despite, plenty of excellent output, Pied Piper didn’t achieve too much success but over the years Pied Piper material has become hugely collectable with plenty of their output achieving iconic status on the Northern soul scene. Reissue/collectors label, Ace/Kent has won access to the Pied Piper archive and has already released a memorable cross section of Pied Piper music. Here they offer another 24 tracks and, if we’re to believe the billing, this could well be the last full Pied Piper compilation. However, though this may be the last throw, this isn’t a “scraping the barrel” exercise… the music here is consistently excellent and Detroit collectors and vintage soul lovers will find untold treasures.

Indeed a goodly selection of the tracks have never been issued in any format anywhere before. Most of these are credited to “The Pied Piper Players” and are essentially backing tracks – some used, some unused – featuring the cream of Detroit’s session scene. No names, no pack drill, of course… who would want to incur the wrath of Mr Gordy?

And it’s one of those Pied Piper Players instrumentals that kicks things off. However ‘The Bari Sax’ will be immediately familiar to the Northern fraternity. A version, credited to Doni Burdick, has long been a Northern soul mainstay. That itself was the backing track to Rose Batiste’s ‘This Heart Is Lonely’… another Northern classic. Here enjoy the tune over again; this time beefed up with Mike Terry’s distinctive baritone sax. If ever you wanted an aural definition of proper Northern soul, this is it. But then you could say that about almost any of the track credited to the Pied Piper Players. ‘I’d Like To Know’ is just wonderful (anoraks will recognise it as the backing track to Sharon Scott’s 1966 version of the tune).

There are plenty of fine vocal moments too. Right now, we’re loving the mellow ‘It’s Better’ from Reggie Alexander, Freddy Butler’s ‘I Like Your Style’ (penned by UK duo Phil Coulter and Bill Martin who also wrote ‘Puppet On A String’ and ‘Congratulation’!) and ‘We Go Together’ from The Cavaliers. That song, by the way, was originally a hit in 1960 for surf duo, Jan and Dean!