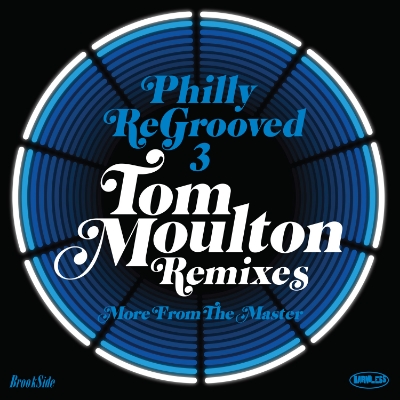 As part of Philadelphia International’s 40th anniversary celebrations, master mixer Tom Moulton was allowed to remix two whole albums of label classics. Tom, of course, had been there back in the day and his original mixes of Philly dance classics were (and indeed remain) mainstays of the dance scene. His new remixes worked the same magic and the two ‘Re-Grooved’ sets proved steady sellers with a number of the selections becoming 2012 modern soul room anthems. Mightily encouraged by this response, Harmless Records tasked Tom to work on a new set of remixes – but this time they expanded their remit; they wanted him to wave his wand over Philly recordings from outside the official Philadelphia International catalogue… and the result is an absolutely sensational 2 CD, 18 tracker that will have not just Philly fans but any soul collector worth his/her salt drooling.

Here Moulton works on things like The Spinners’ ‘Could It Be I’m Falling In Love’, New York City’s ‘I’m Doing Fine Now’, Blue Magic’s ‘Look Me Up’, William DeVaughan’s ‘Be Thankful’, The Trammps ‘Hold Back The Night’ and Bettye Swann’s ‘When The Games Is Played On You’… and if you think those classics couldn’t be improved on, then think again. These new mixes make the great even greater! Why? Well those of you who know about Tom Moulton will know his modus operandi. Unlike modern remixers he doesn’t go in for gimmicks and pyrotechnics. He totally respects what he has to work with and, using what he’s got, he simply extends instrumental passages, highlights percussion breaks and puts real emphasis on key hooks. In essence he simply and oh so elegantly (you can’t hear any joins!) makes the cuts longer- so, essentially, you’re getting more excellence for your money!

The collection offers a couple of great bonuses too – a special remix of Double Exposure’s ‘Soul Recession’ and a 2013 mix of Ron Hall and The Motherfunkaz’ tremendous ‘The Way You Love Me’ – 13 minutes worth of modern soul heaven!