VARIOUS; On The Detroit Beat (Ace) 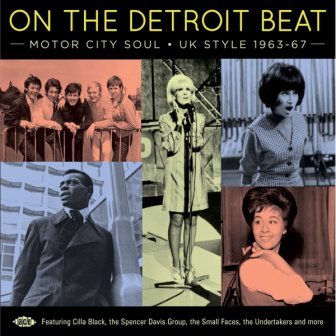 Hard to believe, but yes… it took the mighty Motown empire a while to secure a foothold here in the UK. Berry Gordy began his odyssey in 1959 but it wasn’t till 1964 that he enjoyed his first UK success – Mary Well’s ‘My Guy’. That’s not so say that Motown hadn’t tried. Between ’59 and ’64 Motown released some 40 singles in Britain on labels like London, Oriole, Fontana and Stateside (it goes without saying that those original releases are now hugely collectable!) but to little or no avail. However that doesn’t mean that Motown music was totally neglected. It became the music of choice for the mods; it was played in the best cellar clubs while savvy record company A&R men and music managers had many of their artists record (mostly unknown) Motown material in order to win some UK chart action. Lots of the more switched on early 60s artists loved Motown anyway. Both the Beatles and the Stones included Motown material in their early sets and you may remember that the Beatles’ second LP featured no less than three Motown covers! Yes, so though Motown wasn’t a chart presence, there was an awareness of the Motown sound… and this lovely, new, memory-jerking 24 track Ace compilation amply proves that point.

Here the ace Ace team have put together a varied selection of UK covers of Motown songs – all recorded between 1963 and 1967. The album offers some big 60s names – the Hollies, the Small Faces and dear Dusty Springfield amongst them. There’s also a surprising inclusion from Cilla Black – a raucous version of Jr. Walker’s ‘Shotgun’ – proving that at onetime at least there was more to Cilla than sweet balladeering and silly TV presenting! Amongst the 24 cuts there’s also plenty of 60s wannabees like Guy Darrell, Louise Cordet and Truly Smith whose inclusion is a sweet version of Carolyn Crawford’s ‘My Smile Is Just A Smile Turned Upside Down’.

There’s lots of anorak type intrigue too. For instance Everton FC supremo, radio DJ, ex Corrie actor and mega theatre impresario , Billy Kenwright’s in here… fronting the Runaways, he warbles manfully through Chris Clark’s ‘I Wanna Go Back There Again.’ Ex Searchers lead singer, Tony Jackson, gets a track too… a take on Martha and the Vandellas’ ‘Never Leave Your Baby’s Side’.

It’s all stirring stuff and,wonderfully, I think, the collection boasts what I (humbly) consider to be the best three UK Motown covers – Georgie Fame’s take on the Spinners’ ‘Sweet Thing’, the Action’s cover of Martha and the Vandellas’ ‘In My Lonely Room’ and the Spencer Davis Group’s emotion-stirring take on Brenda Holloway’s ‘Every Little Bit Hurts’. That one’s every bit (pun intended!)as good as the original and impossible to believe that Stevie Winwood was only 16 when he cut that so soulful vocal!

Interestingly too, 7 of the 24 artists here are from Liverpool, while another 5 are from the city’s immediate hinterland – proving that while Detroit was vital to the emergence of soul, Liverpool was absolutley key and pre-eminent in the evolution of UK pop… we knew that anyway!