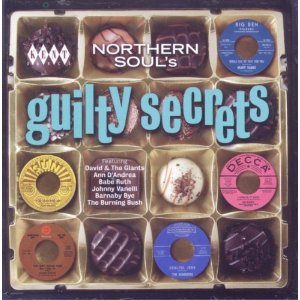 The idea behind this lovely 24 tracker stems from the spate of “guilty secrets” pop and rock albums that have been popular over the last couple of years. You know the ones I mean… they’re stuffed with catchy but trite ditties from pop nonentities – but for all kinds of reasons these intriguing “ear worms” were liked and loved by all kinds of people…. not that anyone would admit to their likings and lovings… well, not in intelligent company anyway!

Here Kent compiler Ady Croasdell offers the Northern Soul equivalent. He’s handpicked two dozen tunes that were popular on the Northern scene in the early/mid seventies – but what links them (apart from their popularity on the scene) is the fact that none are particularly soulful. Indeed almost all were powerful weapons in the armoury of Northern soul detractors. They would gleefully point at say The Newbeats’ ‘Run Baby Run’ or Babe Ruth’s ‘Elusive’ (both included here) and declare what that’s got to do with James Carr or Bobby Bland? In saying that, though, they were missing the point about Northern Soul. The Northern crew (by and large) weren’t bothered too much about soul quotients; they just wanted to dance their cares away. They weren’t bothered whether it was Curtis Mayfield and the Impressions or Jay and the Americans that were doing it for them –as long as they were doing it!

That Jay and the Americans’ track gives you the flavour of what’s included here. Other annoyingly catchy items are Kiki Dee’s ‘On A Magic Carpet Ride’ (check out her recent Fontana compilation, by the way), Bobby Goldsboro’s ‘It’s Too Late’, The Flower Shoppe’s ‘You’ve Comer A Long Way Baby’ and Keith’s ‘Daylight Saving Time’ which is a fine slab of Philly pop (produced and arranged by the Ross/Renzetti team, by the way). Interestingly, there are a couple of “proper” soul singers included – Rodger Collins and Garland Green. Collins’ song is ’73’s ‘You Sexy Sugar Plum’ while Green’s inclusion, ‘Bumpin’ and Stomping’ is from ’75. Neither song is particularly  strong –the former is an early example of synth soul while the latter is an attempt to cash in on the bump dance craze. They certainly don’t represent the artists’ best work but both are catchy and bang on the album’s USP.