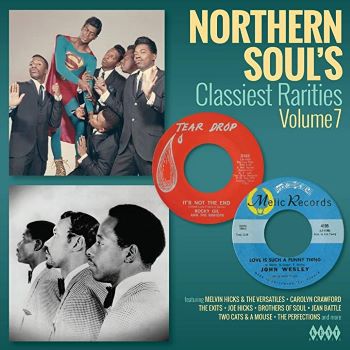 The UK Ace/Kent record label, has over the years, served the soul community admirably and the Northern fraternity has more reason than most to thank the London based set up. From the very start (1978, was it?) the team at Ace via their Kent subsidiary have issued countless gems to satisfy the almost insatiable demand from Northern soul collectors for something different and/or rare.  Amongst Ace/Kent’s most popular series has been their ‘Soul’s Classiest Rarities’ which is now (as you can see, above) in its seventh edition and once again the Kent sleuths/crate diggers have come up with an incredible line up of tunes that all fit the classic Northern criteria (tempo, soulfulness, obscurity and rareness).

The collection offers a generous 24 tracks and even casual soul folk will recognize some of the names. Most obvious is probably Major Lance – a proper Northern soul icon thanks to his Okeh work, mostly in tandem with Curtis Mayfield. Here he offers a 1970 Stax/Volt outing, ‘Girl Come On Home’. Written by Major in tandem with Roger Hatcher and produced by the uber dependable Don Davis, it’s right up there with his best. This album also spotlights a brace of Motown alumina – Carolyn Crawford and Kim Weston. Their tunes are, respectively, ‘Ready Or Not Here Comes Love’ (Stevenson International, 1971) and ‘It Takes A Lotta Teardrops’ (Stevenson International, 1967). Ex Motowner Mickey Stevenson was involved in both recordings (obviously – look at the labels and Leon Ware co-penned the Weston song), so you know soul quality is high. Stevenson is also behind the lesser known Joe Buckner & the Major IV’s ‘I Wish I Knew’ (another Stevenson International record) while another Motown old boy, Jack Ashford is behind Joe Douglas’ ‘Crazy Things’ (Playhouse, 1965). Both prove that even so-called soul also rans can come up trumps.

My personal highlight is ‘You Don’t Care’ from the Esquires. I’ve always been a sucker for classy, soul harmony groups and the Esquires are amongst the best. So, congrats to the Ace/Kent team for finding this real rarity from the Milwaukee group. It seems it was recorded in 1963 for Night Owl Records but didn’t surface till 1968 on a bizarre compilation called ‘Badger A Go Go’!

Sam Dees is another personal favourite and though he’s not included as an artist, he’s the writer and producer on Jean Battle’s ’71 Clintone outing, ‘I’ve Got To Come In’ while for even more class try The Perfections’ ACG 1968 version of Goffin and King’s ‘The Right To Cry’ – more wonderful soul group harmony. But whatever it is that floats your classic soul boat, I guarantee that you’ll find something here to launch it!