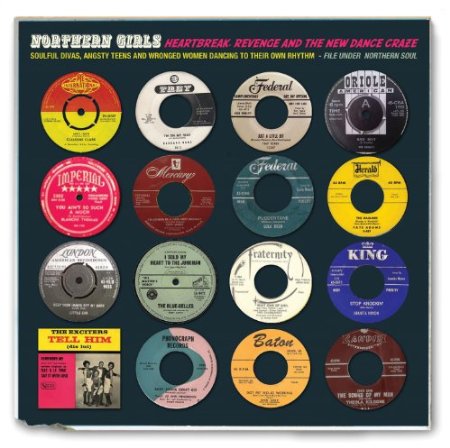 Here’s a new and highly interesting 25 track collection of early 60s female recordings that the compiler thinks fit neatly into the Northern soul bag… and to some extent you can see where he/she is coming from because a lot of Northern “outsiders” think that just because a recording is old, rare and vaguely soulful then it MUST be “Northern”. Those who know the scene and were actually there (denizens of the Twisted Wheel, The Torch, The Casino and countless other cellars and halls in depressed towns throughout the North) know differently. The first essential for a recording to have any kind of legs on the Northern circuit is the beat… “that beatin’ rhythm” which has a peculiar magical feel all of its own. Yep, there’s one or two cuts here that do have that very special ingredient (The Exciters’ ‘Tell Him’ springs to mind) but (speaking as an aged denizen of the Wheel … the original Brasenose Street one …. and a regular Wigan attendee) real Northern soulers wouldn’t touch most of these tunes with the proverbial barge pole!

That’s not to decry the quality of the music…. most of the tunes here are excellent… but they ain’t “Northern”. They have much more in common with the burgeoning new breed R&B scene, Cuts like Ann Coles’ take on ‘Got My Mojo Working’ and Jo Ann Henderson’s version of ‘Baby Please Don’t Go’ are rough-hewn and earthy and would be hugely popular on the oldies R&B circuit. Elsewhere there’s plenty of great classic early 60’s girl group sounds – stuff like The Charmaines’ What Kind Of Girl Do You Think I Am’.

Just as disappointing as the branding of the music are the sleeve notes. They lack depth and were clearly written by someone who wasn’t around in the 60s…. just because someone writes for a prestigious magazine like Mojo doesn’t mean they’re an expert on everything. Cases in point … our annotator fails to mention that a goodly number of selections are early Motown (an important point); he ignores the equally important fact that groups like the Donays influenced The Beatles who also covered another of the songs here (Little Eva’s ‘Keep Your Hands Off My Baby’); and then, when talking about the Exciters’ ‘Tell Him’ he mentions that it was famously covered by the Rezillos (a clue to his background maybe) but doesn’t mention that the most important UK cover version was by mod sweetheart Bille Davis. Equally, the track by track info is poor – no recording dates, no mention of original labels etc. Small points I know but they detract from the overall value of the collection. I presume that the album is aimed at the collectors – many of who are by definition anoraks – so why not get the thing right? Why not get someone to work on the music who knows and understands it? Take a look at the compilations that UK labels like Ace put out to see what I mean.