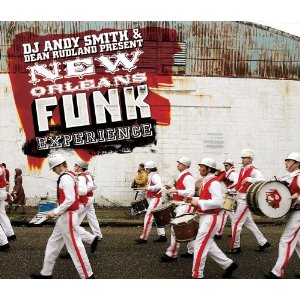 Geographically and socially New Orleans is unique amongst American cities and it’s maybe because of this that the music which emanates from there is peculiar, idiosyncratic and, yes – unique too. In New Orleans soul and funk are never too far away from each other and – possibly because of a TV ad campaign (‘Here Come The Girls’) – there’s been a recent resurgence in interest in the music of the Big Easy. Here, two renowned music biz movers and shakers (Andy Smith and Dean Rudland) have put together a great snapshot of the soul/funk sound of New Orleans and it makes both a good entry point for those starting a collection and an excellent top up for veterans, since many of the 24 cuts are being brought to CD for the first time.

Smith and Rudland have selected tracks from many of the city’s key performers – amongst them Eddie Bo, Betty Harris, Chris Kenner, Maurice Williams, Benny Spellman, Lee Dorsey, and Huey Piano Smith. Indeed Smith’s ‘Don’t You Just Know It’ is the perfect synthesis of the New Orleans sound. Like New Orleans cuisine, it seems every thing’s been thrown into the pot … it’s loose (almost unstructured), rambling, rough, rustic – but infectious and the same adjectives can be applied to almost any of the other selections.

That said, there are a few cuts that don’t quite fit the accepted template. Bobby Williams’ ‘Boogaloo Mardi Gras’ , for example, is a jazzy guitar instrumental (albeit rough round the edges), while Oliver Morgan’s ‘La La Man’ has a Memphis/Muscle Shoals feel about it. Clearly the producers were trying to create their own ‘In The Midnight Hour’… there again Chris Kenner’s ‘Mini Skirts And Soul’ blatantly rips off ‘Hold On I’m Coming’. Maurice Williams’ two cuts are interesting too. ‘Being Without You’ and ‘Don’t Ever Leave Me’ are a little more polished than you’d expect and would fit pleasingly into any Northern soul compilation.

Two other great cuts are Warren Lee’s ‘Star Revue’ and Dave Batiste and the Gladiators’ ‘Funky Soul’. The former is a mix of ‘Sweet Soul Music’ and ‘Land Of 1,000 Dances’, litanising soul’s big names, while the latter is the most appropriately named instrumental you’ll ever hear and though the title is maybe a little prosaic, it could have been used to name the whole set.