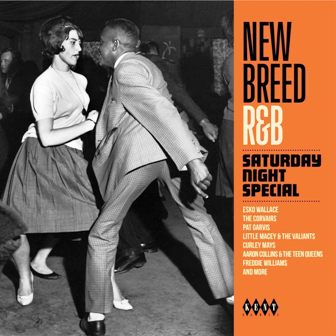 “New Breed R&B” is one of those peculiar soul sub genres that some soul folk relish. And like many of those niche musical pigeon holes, it’s hard to define. However, I’m reliably informed that “New Breed” music is essentially early soul and authentic R&B popular with second generation mods and a crowd who call themselves “soul dropouts”.  There are a number of clubs that specialise in the music – one of the main ones is Sheffield’s Pow Wow Club. Sonically, “New Breed” music is rare, tough and eminently danceable. Maybe a bit like Northern soul – but not quite. Some “hard core New Breeders” will tell you that a lot of Northern is too popular and, worse, “bastardises” soul!  To complicate matters on the continent (especially Belgium) “New Breed” is referred to as “popcorn”; those dear hard core folk will tell you that there are subtle differences (of course!)

Interestingly the term “New Breed” was coined back in 2001 by the staff at Ace/Kent records as a catch all summation for a compilation of early soul  that they were working on, so it’s no coincidence, maybe, that Kent have just issued a new “New Breed” compilation, subtitled “Saturday Night Special” – the inference being that the music would be ideal for Saturday nights at places like the aforementioned Pow Wow club and by extension the dive dance halls and juke joints of America’s chittlin’ circuit in the early 60s.

The album offers Kent’s usual generous 24 tracks and the selection ticks all the boxes in the “New Breed” definition. The music is certainly rare with many of the offerings previously unissued in any format, like the tough opener ‘Every Saturday Night’ from Aaron Collins and the Teen Queens. That musical “toughness” is repeated throughout the album and each and every track will have heads nodding, feet tapping, even more!

Biggest “name” amongst the 24 is Johnny Guitar Watson who offers the sleazy ‘Wait A Minute Baby’ while anoraks will recognize the name of Tony “The Entertainer” Clarke whose 1961 ‘Love Must Be Taboo’ is a far cry from the relative sophistication of his Chess outings. Interestingly , listening, many of the tracks will remind you of something else … for instance, Stax’s Prince Conley’s ‘Ain’t That Good’ is a double take on the Drifters’ ‘If You Don’t Come Back’ while the 1962 ‘Show How Me To Shake Like That’ from the Lon Genes was clearly  built on the chassis of the Olympics’ 1959 hit ‘Hully Gully’.

Music genres? Well, of course, the Motown main man once said there were just two – good and bad. Here you’ll find lots that good – great even and plenty that might well have inspired Mr Gordy.