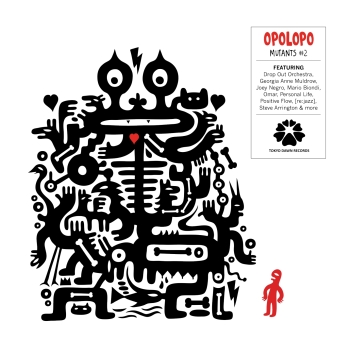 Most soul folk are familiar with Scandinavian master mixer Opolopo via his fab re-toolings of some of Gregory Porter’s best but he has a pedigree that long predates the emergence of Porter and like the meaning of his name (“Opolopo” is Yoruban for “plenty”) his productions have a huge breadth and diversity.

Opolopo (Peter Major) was born in Hungary and, as a boy, he toured with his musician father –enjoying the music of people like Herbie Hancock, EWF, Quincy Jones – even Kraftwerk! Though now residing in Scandinavia, he tours himself worldwide, playing out as an in-demand DJ and working with jazz ensemble, Expansions. He’s released numerous albums on numerous labels and his bootleg remixes of tunes by Michael Jackson, Marvin Gaye and Diana Ross are hugely sought after. His current business home is Tokyo Dawn Records and this wonderful compilation is his fourth for the label.

It would be easy to describe the music on ‘Mutants Volume 2’ (I sadly missed the first instalment) as classy soulful house. It surely is that. Tracks like Roy Ananda’s ‘The Only Thing That Makes Sense (Is You)’ and Taliwa’s ‘Music For My Sun’ could define the genre. Urgent and hugely insistent, they are everything that proper “soulful” house should be. But there’s much much more to this collection than that.

For instance, the mix of [re:jazz]’s ‘At First Glance’ is a hypnotic instrumental item while the Opolopo mix of Personal Life’s ‘My Prediction'(Omar on vocal here)is a great slab of polished 21st century funk. Then there’s the visit to Joey Negro’s Sunburst Band’s ‘In The Thick Of It’ – recreated into a great 80s weekender anthem. It does everything that Cool Million does… but somehow does it all more effortlessly.

Hear that effortlessness at its very best on the album’s outstanding track – the remix of Mario Biondi’s ‘This Is What You Are’. Always a classy cut, Opolopo adds a touch more polish …. tasty but subtle brass stabs, some sweeping strings and glistening percussion to allow the Italian’s soulful vocal to soar. Less in your face that Opolopo’s mixes of say Gregory Porter’s ‘1960 What?’ but none the less ultra satisfying…. indeed, like everything here. Find out more @ www.tokyodawn.net