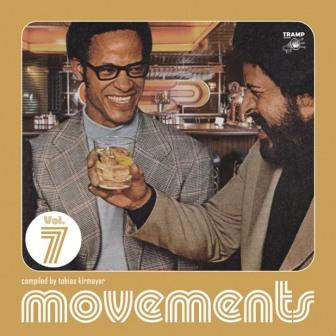 Germany’s Tramp Records is one of Europe’s most esoteric of reissue labels and ‘Movements’ is their landmark compilation series. Volume 7 has just hit the sales racks and the new 17 tracker is as unusual, varied, raw and soulful as the previous six instalments.

There is, however, just one difference. ‘Movements’ doesn’t usually feature any big “names” but here there’s something from a superstar – Al Jarreau. For this collection, Tramp have included one of his early recordings – a scatty, vocal, live version of Paul Desmond’s ‘Take Five’ . It’s one of many jazz/soul-jazz cuts on the album which come sequenced in the LP’s mid section. They vary from a version of ‘California Dreaming’ by the Nu Art Quartet to an odd ‘The Purple Jellybean’ courtesy of the Johnny Walker Trio. I keep coming back, though, to the brassy ‘Sugar’ from Howard A Smith which kind of sits on the Lou Rawls soul side of jazz.

The soul selections are equally intriguing and esoteric and amongst them are Johnny B and the Music Makers’ version of Ray Charles’ ‘Unchain My Heart’ and a great version of ‘St James Infirmary’ from Shelley Fisher which gets to name check Aretha Franklin!

Newer soul is represented by ‘Hearts Are Jumping’ from the Eminent Stars – but despite its relative modernity it in no way detracts for the esoteric nature of the compilation.