Various: ‘Move On Up – The Very Best Of Northern Soul’ (Universal) 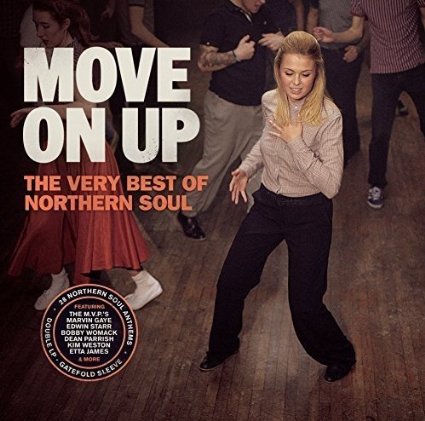 Here’s a special compilation which distils the best tracks from both volumes of Universal’s mega-successful Northern Soul collection, ‘Move On Up,’ and serves them up on vinyl. It’s a tasty double LP comprising twenty-eight songs (seven per side) presented in a gatefold cover which is adorned with pictures of Northern Soul’s young poster girl, fresh-faced Levanna McLean, who also supplies the liner notes. As a vinyl entree to the Northern Soul phenomenon it’s unimpeachable – a perfect primer featuring both familiar and obscure names and dominated by an exhilirating dance floor beat. High on the list of standouts is Frank Wilson’s cult classic, ‘Do I Love You (Indeed I Do),’ followed by Edwin Starr’s anthemic ‘Time,’ Kim Weston’s immortal ‘Helpless,’ Barbara Randolph’s ‘I’ve Got A Feeling,’ Brenda Holloway’s ‘When I’m Gone,’ and Marvin Gaye’s ‘This Love Starved Heart Of Mine.’ All these, of course, came out on Motown, which is well-represented here (as you’d imagine on a Universal compilation) but there also tracks licensed in from other labels, including floor filers by The MVP’s and their ‘Turnin’ My Heartbeat Up,’ along with Bobby Womack & The Brotherhood’s ‘Home Is Where The Heart Is,’ Dean Parrish’s ‘On My Way,’ Nancy Wilson’s ‘The End Of Our Love,’ Levi Jackson’s ‘This Beautiful Day,’ and Timi Yuro’s ‘It’ll Never Be Over For Me.’ Though purists might baulk at the inclusion of too many, so-called ‘commercial,’ tracks – exemplified by Stevie Wonder’s ‘Uptight (Everything’s Alright)’ – this is an anthology not aimed at the seasoned collector but rather is targeting potential neophytes. And, with that in mind, it does a sound job, presenting a well-rounded portrait of the Northern Soul scene that functions as an attractive introductory package.