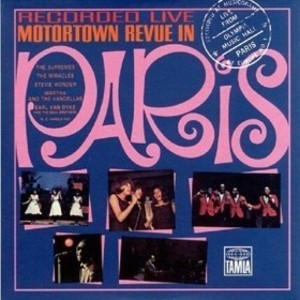 In the early days of Motown, one of the ways in which Berry Gordy promoted his acts was to mount lengthy live tours throughout the States. He’d put together a bill of six or seven of his acts and send them out to spread the message and, of course, bolster record sales. It was logical therefore that when the UK and Europe began to show interest in the Motown sound, he’d send similar shows across the Atlantic. So, Spring 1965 saw the arrival of the first such package tour in the UK and, sadly, it’s famously told that apart from the London shows, the concerts were poorly attended. In panic, the promoters added Georgie Fame to the line up (and Georgie will tell you that’s when he got to love Motown and found the song ‘Sweet Thing’, but that’s another story).

The Motown Revue eventually pitched up in Paris and the shows were recorded with the subsequent live album released in America in Summer ’65 and in Europe the following year. That album has just won reissue in an extended 2CD or 3 LP vinyl format and, though mid 60s live recoding quality isn’t up to the quality standard of the 21st century, the package magnificently captures the atmosphere and all the excitement of early Motown.

The artists on the bill included The Supremes, The Miracles, Stevie Wonder and Martha And The Vandellas while the backing was provided by the Earl Van Dyke Sextet. Van Dyke’s band opened proceedings in their own right on both halves of the show and on each stint they were given a generous 4 tunes. The other acts, unsurprisingly, go through a selection of their biggest contemporary hits though they also have a stab at what I guess we would call “standards”. So, for instance, the Supremes trill through ‘People’, ‘Somewhere’ and ‘You’re Nobody Till Somebody Loves You’, The Miracles have a MOR stab at ‘Wives And Lovers’ while Little Stevie has a go at ‘Make Somebody Happy’ and Willie Nelson’s ‘Funny How Time Slips Away’. Students of Motown will know that this was consistent with Gordy’s policy of trying to get his acts out of the chittlin’ circuit and into (what he saw) as the more lucrative supper club market and the inclusion of these songs only adds to the veracity of the release as wonderful primary source material for Motown lovers in particular and anyone who cares about soul music in general.