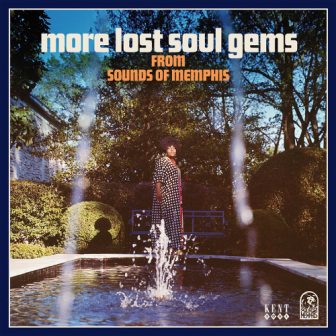 Think Memphis soul and think, probably, Stax and Hi. Discerning soul buffs, however, know that there’s much more to Memphis music than those two iconic labels. In the wake of Stax’s success dozens of indie labels sprang up in the city – some run by legitimate business men, others in the grasp of hustling chancers, but all were all hoping to tap into the pool of soul talent that Memphis attracted. One of the more legit entrepreneurs was Gene Lucchessi, who, in 1964, set up the Sounds Of Memphis label. At first it was a hobby but when he found success with Sam The Sham and the Pharaohs’ ‘Wooly Bully’, he started to take things a bit more seriously –even building his own state of the art studio.

The back catalogue of Sounds Of Memphis and its associated labels is now curated by Gene’s daughter, Linda who last year brokered a deal with the UK’s Ace/Kent Records and this new 22 track compilation is the latest fruit of the partnership.

This new set is aptly titled. It’s proper “soul” all the way and most really are “gems”. “Lost”? Well there’s not a lot here that’s that well known…in fact 18 of the 22 selections have never ever been released before. One of those features perhaps the best known artists on the set, Barbara and the Browns. Their contribution is the mid-tempo ‘Human Emotions’ – as typical a slab of Southern soul as anything that came out of Stax…. and Ms Brown is in fine testifying form.

Other known names on the album are George Jackson and Dan Greer. Jackson’s contribution is the Staples-flavoured ‘Hold On, Hold Out’ while Greer weighs in with a rustic but spritely ‘Since My Baby Left Me’.

Amongst the lesser known artists are Carroll Lloyd, Ann Hodge, Fran Farley, Art Jerry Miller, Barry Jones and a vocal harmony group called Vision. The three piece only ever made one recording, the one featured here… ‘Lost In A Dream’ and it proves that Memphis could do sweet soul as well as the Northern cities.