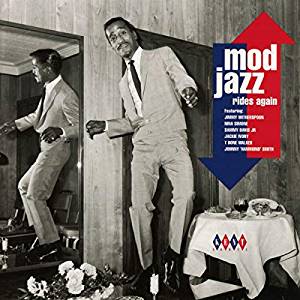 Over the past several years, Ace/Kent have curated a wonderful series with the titling “mod jazz”. The idea was to present a selection of late 50s/early 60s jazz, soul-jazz and blues that first generation mods could have grooved to in their smoky 60s cellar clubs and chic Italian style coffee bars. We use the term “could have” rather than “did”, because most of the tunes that the Kent compilers selected for these albums never ever saw release in the UK and with imports few and far between (and very expensive), it was unlikely that any 60s mods ever shimmied/walked the dog/ boogalooed to the music on the albums. That’s not the point though. The music on the albums was exactly what the mods would have enjoyed had they the opportunity to get hold of it. Whatever, as you can see from this review’s title, Kent has resurrected “mod jazz” and here they offer another fine selection of foot-tapping, head-nodding, sophisticated 50s/60s modernist club sounds.

As with previous mod jazz albums, the big names rub shoulders with lesser know performers. So, for instance, Nina Simone sits cheek by jowl with people like Billy Graham and the Escalators. Little is known about Billy except that his soul-jazz groove,  ‘East 24th Avenue’ was released on US Atlantic in 1966. The Nina Simone cut by the way is ‘Come On Back Jack’ – her answer to Ray Charles’ ‘Hit The Road Jack’. Like that one, there are plenty of other well-known tunes here – all given interesting new treatments like Johnny “Hammond” Smith’s version of another Charles’ tune – ‘Sticks And Stones’. Here the highlight is Freddie McCoy’s vibes rather than Smith’s mighty organ!

Another album highlight is a swinging version of Tony Hatch’s ‘I Know A Place’ from Sammy Davies Jr (backed by the Buddy Rich band, by the way!) while Harold Better’s ‘Hot Tamale Man’ is just the kind of tune that Georgie Fame would have covered at the Flamingo (if he’d known about it back then!)

‘Mod Jazz Rides Again’ also offers plenty of classy blues from people like Otis Span and T Bone Walker while the blues classic ‘Spoonful’ is here too in a Booker T style makeover from the Playboy Five.