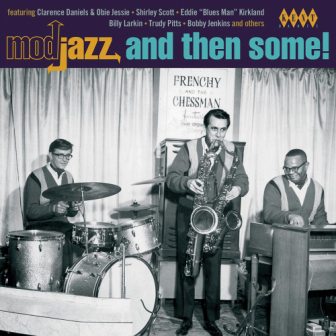 It’s been a while since Kent served us up a new Mod Jazz compilation but if you choose to investigate this new 24 tracker you’ll learn that the wait’s been worthwhile. As ever the music is the music that would have been played in the smoky, cellar clubs of the UK’s big cities in the early/mid sixties. I say “would” rather than “was” ‘cos a lot of the music on this album just wouldn’t have been available to the DJs and mod cellar dwellers back then. Indeed one of the cuts herein has never been issued before – it’s a jazzy cover of Donovan’s ‘Sunshine Superman’ from a UK trio – Bockins, Robinson and Morais. Bockins had been in a band with Alan Clarke and Graham Nash before they formed the Hollies; Robinson was in a band called Quatermass; while Trevor Morais was a Merseybeat fugitive (drummer in Faron’s Flamingos) who was to go on and form The Peddlers. Their ‘Sunshine Superman’ is a great slab of Hammond-led soul jazz and as I’ve just intimated, though it couldn’t have been played in 60s mod venues (it hadn’t ever been released), its flavour sums up the sounds that were played in those great venues in those good ‘ole days.

The collection features more great Hammond sounds – a take on the ‘In Crowd’ from Johnny “Hammond” Smith and ‘Screamin” from Brother Jack McDuff amongst them. There’s also a cut from Billy Larkin, which you might expect to be an organ grinder. But, surprisingly, his ‘Looking’ is a sprightly vocal cut… one of many great vocals on the collection. Listen up to Mark Murphy’s sophisticated ‘It’s Like Love’ and Tobi Lark’s soulful ‘Talkin’ About Love’. Different again is blues man Buddy Guy’s live version of ‘Fever’ – and, you know, it’s that very variety that makes this album so damn enjoyable – even if you weren’t a sixties mod.