VARIOUS: Message In The Music (Harmless) 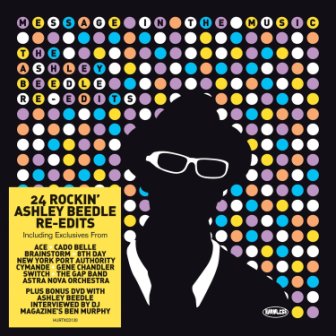 Ashley Beedle’s been DJ-ing since the 80s and since then he’s worked all over the place; his top man status has also allowed him to re-mix and re-edit countless dance classics and though he’s compiled dozens of winning compilations, I’m guessing none has caused him more headaches than this one. ‘Message In The Music’ (sub-titled The Ashley Beedle Re-Edits), you see, has been in the pipeline for almost four years! Beedle was commissioned for this project back in 2009 and, determined to make it his best collection yet, he’s trawled here there and everywhere but as he put his ideas together he encountered all kinds of problems… amongst them, missing master tapes, label recalcitrance, unrealistic licensing deals and so on. But hey, that’s business and the music’s here right now for us all to enjoy its message.

Those of you familiar with Ashley Beedle’s work will know of his eclecticism and wide ranging tastes and if you didn’t, a quick glance the track list will let you in on the secret. What other DJ/compiler would mix Gene Chandler with The Fall or juxtapose Doris Duke with Family? Well, Beedle does and he just about gets away with it by confining the rockier pieces like the aforementioned Family’s ‘Burlesque’ and The Fall’s ‘Touch Sensitive’ to the first CD. There you’ll also find stuff like Bill Withers’ ‘Railroad Man’, Cymande’s ‘For Baby Ooh’ and a quite lovely ‘Guess I’m Gonna Cry’ from New York Port Authority while soul fans may be pleasantly surprised by pub rock band Ace’s ‘You’re All That I Need’ – another great vocal from ever-dependable Paul Carrack.

It’s the set’s second CD though that will keep the soul collectors happy. It pulls together great tunes from people like Brainstorm, Holland-Dozier-Holland, The Gap Band and (as we mentioned up top) Gene Chandler and Doris Duke. Gene’s cut by the way is his version of the perennial ‘All About The Paper’ while Doris graces us with a nine minute version of ‘Woman Of The Ghetto’. Philly soul’s represented by Heaven N’Hell’s ‘Whatcha Gonna Do’ and it’s good to see newer talent getting an airing… let me point you Aussie songbird Kylie Audlist’s sweet n’lovely ‘In A Week In A Day’ – which Beedle extends to a just right six minutes. The message is in her music right enough. However, you get more than music here. The pack comes with a bonus DVD featuring an interview with Ashley Beedle and a track by track commentary and extensive sleeve notes and pics.