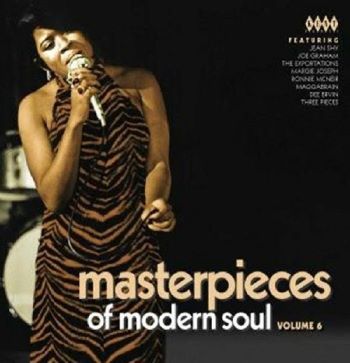 ‘Masterpieces Of Modern Soul’ is one of Ace/Kent’s most successful and popular compilation series and no wonder! It makes available a plethora of rare and collectable soul (much of it previously unreleased) at a proper price. And if you’re a real soul fan who cares about the music rather than the vehicle that provides it, then why shell out hundreds of pounds for a worn 45 from way back when you can enjoy the tune in bright, remastered CD sound for just over a tenner!

Whatever! Kent have just launched volume 6 in the ‘Masterpieces’ series and in terms of quality, rarity and variety, the new 22 tracker is right up there with the previous volumes.

The big attraction of volume 6 has to be the dozen previously unheard tunes alongside a brace that are very different versions of already popular numbers. Amongst the newly discovered tracks is one from cult soul hero and now, it seems, a permanent Four Top, Ronnie McNeir. His offering is the busy, atmospheric  ‘Let’s Make a Move’ from 1972. And the good news for Ron’s fans is that Kent is preparing a whole album’s worth of some more of our man’s previously unheard recordings. Amongst the other fresh outings are Dee Irvin’s ‘You Make Me Happy’, the Exportations’ ‘Second Time Around’ and a lovely, light ‘You Could Have Tried’ from the obscure Karen Sanders Group.

Bigger names are represented by people like Betty Everett, Ramona King (with another previously unheard gem, ‘Happy Times’), Margie Joseph and Philip Mitchell whose ‘I’ll See You In Hell First’ is one of those “new” versions . There’s also input from dear old Sam Dees – but not as an artist; he’s the writer on Maggabrain’s previously unissued ‘Have A Good Time’ – a lovely slice of mid 70s optimism.

Unlike the previous 5 volumes of ‘Masterpieces’, the compilers have opened up the dates of the selections to include tunes from the late 70s and early 80s. The Maggabrain outing is from that era as is the Joe Simon produced  ‘I Want You’ from unknown group Cynic and Melanie Burke’s ‘I Can’t Turn You Down’, like the Ronnie McNeir track, a Mickey Stevenson production.

‘Masterpieces Of Modern Soul 6’ is out now via Ace/Kent