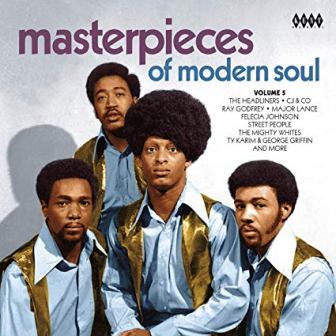 ‘Masterpieces Of Modern Soul’ is one of Ace/Kent’s most popular compilation series and here it reaches its fifth edition and like the previous four it’s stuffed with a great cross section of what’s dubbed “modern” (by sound rather than age) soul – some relatively well-known and easy to get hold of but plenty, too, that’s rare, elusive and collectable.

Let’s look first, then, at some of those better known items. First up – a personal favourite…. Major Lance. Always a great uptown stylist, forever linked with the classic 60s Chicago sound, his inclusion here comes from 1972 when he was pacted with Stax/Volt, but his ‘That’s The Story Of My Life’ harks back to his glory days at Okeh. More well-known quality from the Independents (their version of ‘Lucky Fellow’ –a song more usually associated with Leroy Hutson); John Edwards (his take on Philip Mitchell’s ‘How Can I Go On Without You’); Eddie Floyd (a previously unissued edit of the lovely ‘Can We Talk It Over’); Mille Jackson (a bustling and busy ‘I’ll Continue To Love You’) and Loleatta Holloway (another unissued item – ‘Mr So And So’s Daughter). Sweetest cut from the “known names” is ‘I Guess God Wants It This Way’ from Freddie Scott. It’s a beautiful recording with the feel of those great Jim Webb classics about it.

Now some of the lesser known inclusions. I don’t know much about Reggie Milner but his 1970 Volt recording of ‘Hello Stranger’ is superb – it should be, it was produced by Ollie McLaughlin! A tad rougher is Lee Porter’s ‘Nobody’s Doin’ A Doggone Thing’ – which, we’re told, is ultra rare. Equally elusive is Chet Ivey’s ‘Dose Of Soul’. But, of course, rarity and elusiveness should never be the yardstick by which a sound is judged!

Here across a generous 24 cuts you do get plenty of rarities; like we said, they sit alongside better known items; what unifies them is their sweet soul quality…. everyone’s a winner!